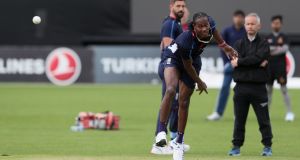 England all-rounder Jofra Archer during a nets session in Malahide on Thursday ahead of Friday’s One-Day International against Ireland. Photograph: Brian Lawless/PA Wire

Not for the first time, England arrive to start the international season in Ireland with matters off the pitch taking the spotlight from the game itself.

Four years ago it was the future of coach Peter Moores that topped the agenda, with the Irish weather also playing its part as just 18 overs of play took place before the deluge forced the players off and sent the crowds to seek shelter, many in the local hostelries of the seaside town.

The weather is set fairer this time around but the clouds surrounding England are even darker, especially so in a summer where they host the World Cup, starting on May 30th.

The events surrounding the 21-day ban imposed on opening batsman Alex Hales for recreational drug use and the timeline of how his team-mates only found out through the media were tackled head on by England captain Eoin Morgan, who outlined that Hales’s axing from the World Cup was a decision made by the players.

“This has created a lack of trust between Alex and the team. On Saturday we got together as a group of senior players to discuss the effect the news coming out would have on the team and the culture.

“We all agreed the best decision for the team was for Alex to be deselected. I relayed this to Ashley Giles [managing director of England men’s cricket] because we don’t have final say, I can only give the view in the changing room and how guys feel.”

The absence of Hales has also overshadowed the debut of Jofra Archer, the sublimely talented 24-year-old all-rounder, in Friday’s game.

Born in Barbados, Archer holds a British passport through his father but was originally subject to a seven-year residency ruling due to the fact that he did not live in England until after his 18th birthday.

Cue a change in the eligibility rules by the England and Wales Cricket Board as seven years became three, leaving Archer eligible for this summer’s World Cup.

Of course Ireland will miss out on the summer party of cricket after missing out on one of the two qualifying places on offer in the 10-team, 48-match tournament.

The transition of the side as many of the golden generation retire from Ireland duty continues under coach Graham Ford, with the squad showing a healthy spine of experience alongside some exciting young talents such as teenage left-arm seam bowler Josh Little.

Gary Wilson has returned to the squad after missing the winter due to being diagnosed with a condition that affected his vision, something that could be seriously tested by Archer, who can bowl over 150 km/h, just a touch under 95 mp/h in old money.

One late change to the Ireland squad sees Mark Adair come in to the 14 in place of Stuart Thompson, who injured a shoulder in training on Wednesday.

With Ireland going straight into a Tri-Nations series against the West Indies and Bangladesh, the 23-year-old Adair is in line for a rapid promotion to the senior international ranks.