Commercial hold their nerve to see off fast-finishing UCD 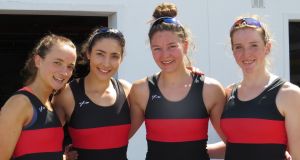 Commercial’s men’s eight held their nerve to finish ahead of fast-finishing UCD in an excellent final race of Skibbereen Regatta at the sunny National Rowing Centre.

The champions of Ireland had a strong lead with 700 metres to go, but the students pushed them to the end and were just 1.75 seconds behind on the line. Cork Boat Club were a close-up third.

UCC capped a superb regatta for them with a big win in the women’s eight, and had also taken the women’s four, with a mix of internationals and club rowers.

Gary O’Donovan’s return from a wrist injury provided a good news story of the two-day Grand League event – he finished second to in-form Fintan McCarthy in the single sculls. But the biggest talking point was the performance by 14-year-old Holly Davis. The Lee Valley girl is a world record holder on the ergometer for her age and she proved the best junior 18 competitor and won the junior 16 single sculls by a country mile.

Portadown’s regatta on Saturday showed all the virtues of a traditional two-boat regatta with a welcoming air – and bright sunshine. Visiting crews Carrick-on-Shannon, Enniskillen and Neptune all put strings of wins together.