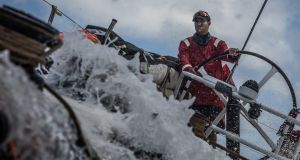 Alex Gough on the wheel surfing the waves on board Sun Hung Kai/Scallywag during the leg from Melbourne to Hong Kong. Photograph: Konrad Frost/Volvo Ocean Race

Of all the things that might possibly happen during the Volvo Ocean Race, falling overboard is probably my number one nightmare. Potentially hundreds if not thousands of miles from land and very limited options for rescue, it’s a rare occurrence yet still not unheard of.

Like when Alex Gough went overboard from Scallywag earlier this week.

It was all over by the time we heard about it but the sense of relief that he was safely recovered within seven minutes remains with us. Had it been night-time or in colder water, it might have been a different outcome.

Everyone is now much more vigilant, wearing our safety gear even in lighter conditions, so I think it has helped us be more careful.

Incredibly, the Scallywag team managed the recovery without losing much ground which is also impressive, especially as they have the overall lead of this 6,000 nautical-mile leg from Melbourne to Hong Kong.

Yep, that’s right, from a week ago when we were the fleet leaders on Turn the Tide On Plastics with the Scallywag team a long way behind, they pulled off a high-stakes gamble and have leapfrogged into a strong lead.

We ended up stuck in the doldrums for five days, almost totally becalmed and making very little ground. We got stuck under several huge clouds while boats further behind us escaped and eventually worked their way into the fresher north-east trade winds.

Nor were we alone. Overall race leader Mapfre skippered by Xabi Fernandez and Dutch entry Brunel, skippered by the most experienced race sailor Bouwe Bekking, were also caught by the clouds and the three of us are all in a second group of boats hunting the fastest route past the Philippines and into Hong Kong. We expect to arrive by the weekend which is just as well as we only have food until Friday.

Tactical options are now very limited apart from a potential slow-down approaching the coast of China when the winds go light so this leg is far from decided.

But certainly, it looks like being Scallywag’s leg to lose as they have a strong lead. I’m really happy for them as they’re a really good bunch of people and I think it will be brilliant if they win into their home town. They took a big risk when they were at the back of the fleet and the gamble really paid off.

We spent a lot of the first two legs of the race in close company at the back of the fleet but their performance has improved with race experience so it proves the theory that we can improve and challenge for leg podium places.

Our own performance on Turn the Tide On Plastics has also definitely picked up as can be seen by this leg. I think we have learned how to change mode in most conditions so when the weather changes we can quickly get the boat going as fast as possible again while before it maybe took a long time to do that.

The entire crew was very inexperienced but now everyone is getting very good around all positions on the boat. I’m now pretty comfortable, even the pit with control ropes going everywhere which used to terrify me!

We can now keep pace with the boats leading this race when we are side by side which we wouldn’t have been able to at the start. I think we will definitely have our moment in this race as we still keep on improving.

However, this hasn’t been an easy leg, especially in the doldrums when we were becalmed and it has really messed with my head. A lot of the time I am counting down the minutes to get ashore although I know that is the worst possible thing I can do.

I have found this leg particularly tough and I haven’t done much driving so my day is pretty boring. I get up, go on deck do a couple of hours on the grinding then another hour on main sheet trim, then I just help with anything that needs doing for the last hour before going back down to bed!

But now that we’re moving again I did some driving today and my head is a lot clearer as it requires deep concentration and challenge which is something I have missed a lot. Getting ashore will allow me to think clearer and not have so many mad notions going through my head.

I have been getting a lot of emails from family and friends which really brightens up my day. Even just hearing things like how Leinster played in the Champions Cup is really nice to know when most of my time I am in this bubble where I have no idea what is going on in the world.

Still, we’ve had some fun as well. Equator first-timers Bernardo and Bleddyn got some great reverse mohawks from King Neptune and we’ve been in a beautiful part of the ocean.

I got an email from my brother telling me how lovely the Solomon Islands looked from photos on the web though we could only see something vague in the distance as we passed – slowly. We’re firmly here to race so stopping for some sightseeing isn’t an option though definitely tempting!

Overall everyone is in good spirits on board now that we’re moving quickly again. Of course, we are all disappointed to not be leading but we are still racing hard and looking forward to getting some proper rest in Hong Kong.

We have just over a thousand nautical miles to go, a food deadline of Friday and 11 hungry crew to feed. Think I might stash a few chocolate bars in my bag, just in case.