Pironkova stuns Muguruza to reach third round of US Open

Bulgarian had retired following the Championships in 2017 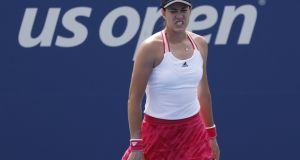 Garbine Muguruza of Spain reacts as she plays Tsevatna Pironkova of Bulgaria during their match on the fourth day of the US Open Tennis Championships in Flushing Meadows, New York on September 3rd. Photograph: Jason Szenes/EPA

Tsvetana Pironkova stunned Garbine Muguruza to reach the third round of the US Open – her first tournament for more than three years.

The Bulgarian, a former Wimbledon semi-finalist, retired following the Championships in 2017 and gave birth to her first child, son Alexander, but decided to give the tour another shot earlier this year.

The suspension of professional sport delayed her comeback but she has certainly made up for lost time.

Having beaten Liudmila Samsonova in the first round, Pironkova showed her prowess on fast courts has not diminished by knocking out 10th seed Muguruza 7-5 6-3.

The 32-year-old said: “It obviously means a lot to me, especially now. But, at the same time, I always knew I had it in me because it’s not the first time I win [against] a top player. “I was on the tour for almost 15 years, and I had many occasions where I played against the best of the best players. I also scored quite a few wins over them. “I guess I was mentally prepared. It’s not something super new. At the same time, I was feeling well, I was moving well, I was hitting the ball well. Why not win?”

Muguruza made a late decision to come to New York and knew her lack of preparation could cost her. That did not stop her showing her frustration with a spectacular smash of her racket after losing the first set, snapping the head clean off.

“It was a tough moment,” she said. “I guess I’m stronger now. “I just wanted to come here, test a little bit myself, see where I am tennis [wise], physically, and add as many matches as I can to, I guess, this strange year.” Australian Open champion Sofia

Kenin continued her winning streak at grand slams with a 6-4 6-3 victory over 17-year-old Canadian Leylah Fernandez. There was an all-teenage battle on Louis Armstrong Stadium, where 19-year-old Amanda Anisimova defeated 16-year-old Katrina Scott 4-6 6-4 6-1. The pair are among the seemingly-endless production line of young US female talent, with Scott three months younger than Coco Gauff.

Anisimova reached the semi-finals of the French Open last summer but pulled out of the US Open following the sudden death of her father and coach Konstantin. She blew a kiss to the sky after completing the comeback and said she was inspired by memories of her father.

“I was just thinking about him the whole time and it was giving me a lot of energy to pump me up and get myself going,” she said.

Britain’s Johanna Konta suffered a disappointing second-round defeat to Romania’s Sorana Cirstea . Konta’s run to the semi-finals of the Western & Southern Open last week had boosted hopes of another strong grand slam showing and she led by a set and a break against 77th-ranked Cirstea only to lose out 2-6 7-6 (5) 6-4. Ninth seed Konta saved two match points in the ninth game of the decider but Cirstea took her third with an ace after two hours and 49 minutes.