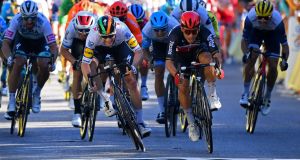 Australia’s Caleb Ewan crosses the finish line ahead of Ireland’s Sam Bennett (left) during the third stage of the of the Tour de France between Nice and Sisteron. Photograph: Stuart Franklin/AFP via Getty Images

“Close but no cigar,” is how Sam Bennett aptly put in, the Irish rider coming within a split second of making hope and expectation perfectly rhyme, only to the lose out on the finish line to Caleb Ewan after the Australian nailed his sprint to perfection to win stage 3 of the Tour de France after the 198-km run from Nice to Sisteron.

Further acknowledging the “great sprint” by Ewan, Bennett was looking to become only the sixth Irish rider in history to win the famous accolade, and also appeared to have judged his final sprint to absolute perfection, riding first off the Deceuninck-QuickStep lead-out train, then opening a lead of the chasing bunch, only for Ewan to burst past in the last few metres.

Ewan won three stages in last year’s race, earning him the moniker “fastest rider of the world”, this year riding with a new team Lotto-Soudal, though the 29-year-old Bennett didn’t immediately disguise his disgust having had a potentially historic victory snatched away from him on the line.

It was the sort of finish Ewan relishes, first finding a gap between Peter Sagan (Bora-Hansgrohe), before edging past Bennett within final reach of the line.

It came two days after hopes of an Irish stage win and a first yellow jersey in 33 years fell just short on Saturday afternoon, as Bennett finished a desperately close fourth on the final bunch sprint down the fast Promenade des Anglais, where Kristoff Alexander from UAE-Team Emirates won the stage and the yellow jersey for Norway.

There was a slightly hilly road into the final flat open sprint, after a final roundabout, and the lead-out train proved again crucial, with Deceuninck-QuickStep doing everything right for their Carrick-on-Suir rider, the team the previous day also winning stage 2 into Nice and the yellow jersey thanks to the French all-rounder Julian Alaphilippe.

The stage followed the magnificently scenic Route Napoléon, rolling up over 3km in vertical climbing, and despite a long breakaway by French rider Jerome Cousin, this one was always like develop into a sprinter’s paradise down the last 50km from the beautiful Digne les Bains, where Bennett’s hunger for the stage win became increasingly evident.

Nicolas Roche and Dan Martin both rolled in safely behind in the peloton, both on the same time too, Roche crossing the line in 95th, and Martin in 135th. It means after stage 3 Roche remains the best placed of the Irish trio, the Team Sunweb rider sitting nicely in 28th, just 17 seconds off the lead.

Martin of Israel Start-up Nation is now sitting in 98th, exactly 18 minutes behind already, with Bennett in 142nd position, 29 minutes and four seconds off the lead in general classification.

Bennett was also looking to become only the second ever Irish rider to win stages in all Grand Tours, equalling Shay Elliott, and the feat that eluded both Seán Kelly and Stephen Roche. With Tuesday’s stage 4 moving into the mountains, a 160.5-kilometre effort from Sisteron to Orcieres-Merlette for the first summit finish of the race, Bennett’s quest to repeat that feat must await another few days at least.