Paul O’Shea finishes best of the Irish in New York

Limerick-born rider fails to fet through to the jump-off at $216,000 Longines Grand Prix 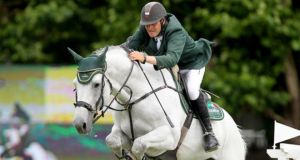 Paul O’Shea was the pick of the Irish in New York. Photograph: James Crombie/Inpho

Co Limerick-born Paul O’Shea finished best of the Irish when sixth in Sunday’s $216,000 Longines Grand Prix at the four-star show in North Salem, New York - although failing to get through to the jump-off.

Five of the 39 starters went clear in round one, O’Shea picking up an expensive single time fault on Hampton Farm’s 10-year-old gelding Terceira which halted his progress. The 1.60m competition was won by the USA’s Devin Ryan on the eight-year-old Eddie Blue.

At home, the main show jumping action over the weekend took place at the Cavan Equestrian Centre where Craughwell’s Sven Hadley was declared leading rider following six days of competition.

In eventing, Irish-bred horses won at three-star level on both sides of the Atlantic at the weekend.

In the United States, the host nation’s Buck Davidson landed the CIC3* class on the 11-year-old Radolin gelding Copper Beach which was bred in Co Offaly by Paddy Daly. In second was another Irish-bred, the 15-year-old Balda Beau gelding Cambalda which was ridden by the USA’s Jennie Brannigan.

At Blemheim Palace in England, the honours in the featured CCI3* class also went to an American rider, Kim Severson, who last competed at the event when she won it back in 2001 on Winsome Adante.

This year her partner was the Irish-bred Cooley Cross Border which spent most of the summer in Ireland at the Cooley Farm base in Co Wicklow of sport horse producer and agent Richard Sheane. Severson flew in to compete the horse in home internationals here on a regular basis.

Cooley Cross Border, which won on his dressage score of 37.8 penalties, is a 10-year-old bay gelding by Diamond Roller and was bred in Co Louth by Johnny Duffy out of the Osilvis mare Whos Diaz. Severson purchased her winner as a four-year-old.

Australia’s Chris Burton won the CIC3* class for eight and nine-year-old horses on Cooley Lands (42.6 penalties), a 2008 Cavalier Land gelding which was bred in Co Monaghan by Peter Rice out of the Clover Hill mare Clover Light Girl. Here, best of the Irish was Co Kildare-based Cathal Daniels on Sammy Davis Junior (59.4).

This coming week, there will be international eventing in Co Cork where the Ballindenisk horse trials start on Thursday with the first day of dressage. In show jumping, a large contingent of Irish horses, and riders, will be competing in the world breeding championships for young horses at Lanaken in Belgium.