Wada’s statement does not kill questions around Chris Froome 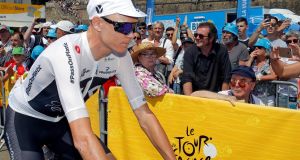 Chris Froome and Team Sky will be hoping that the lengthy statement published last night by the World Anti-Doping Agency, clarifying the circumstances around the decision to drop his salbutamol case, finally defuses the tense and fractious atmosphere around the defending Tour de France champion.

Sky’s team principal, Dave Brailsford, has been pressuring both Wada and the UCI president, David Lappartient, to explain their decision more fully as the atmosphere of hostility from French fans towards Froome continues.

Reacting to the statement at the stage start in Brest on Thursday morning, Froome said: “I’m happy that they have released more data and as I’ve said from the beginning I’m happy for them to do that.”

Yet inconsistencies remain, which will concern those who have both the time – and energy – to trawl through the latest in a long line of statements from the UCI, Wada, and Froome’s team.

Most striking is the Wada reliance on the UCI’s decision to waive a pharmacokinetic study, attempting to recreate the conditions surrounding Froome’s sample from last year’s Vuelta a España, which was not even considered worth mentioning in the UCI’s original statement issued on July 2nd that cleared Froome.

In contrast, Diego Ulissi of Italy was subjected to a nine-month ban after his pharmacokinetic study, following a similar adverse analytical finding on stage 11 of the 2014 Giro d’Italia, failed to convince the UCI.

“I can’t speak for Ulissi but I know in my case it stopped at the explanation phase,” Froome said. “There are two phases: explanation phase and than after that, if that’s not sufficient, it goes to the pharmaceutical study. Mine stopped before it even got to that phase.”

Wada stated that the UCI accepted that in Froome’s case a “pharmacokinetic study would not have provided reliable evidence.”

The statement added that Wada took into account Froome’s physical condition, “which included an illness, exacerbated asthmatic symptoms, dose escalation over a short period of time, dehydration” and added that like Ulissi, Froome was “midway through a multi-day road cycling race.”

But Froome was critical of the possible inequality of treatment of athletes according to financial status.

“If an athlete is given a guilty sentence for his lack of funds and support then I think that’s an extremely dire situation for sport in general,” he said. “It’s not for me to say if there should be some kind of fighting fund but it would definitely help people in that position.”

The Wada statement – published 20 minutes before England kicked off against Croatia in the World Cup semi-final – firmly puts responsibility for the outcome of Froome’s case at the UCI’s door, saying that “from start to finish” the UCI was “solely and exclusively in charge of the procedure and dealt with all procedural aspects of the case.”

As stated by the UCI, Wada asserted that cycling’s world governing body had reached “the right and fair outcome on this very complex case”.

According to the statement, the combination of Froome’s “within-subject variability for salbutamol excretion, the sudden and significant increase in salbutamol dosage prior to the doping control, and the number of consecutive doping controls meant that the analytical result could not be considered inconsistent with the ingestion of a permissible dose of inhaled salbutamol.

“In the Froome case, the test was applied the same as for any other athlete by looking at the unique physiological and circumstantial details that could be clearly determined. Froome was able to show the UCI Tribunal how it was possible that he took a permitted dose of salbutamol.”

According to Wada, between 2013-17, of the 41 completed cases that involved salbutamol as the only substance, 21 out of 41 resulted in suspensions. Yet only four of the 57 completed cases had been within road cycling. – Guardian service