Voice of the New York Yankees feted for his Sterling service

America at Large: No catchphrase too corny for New York club’s long-serving commentator 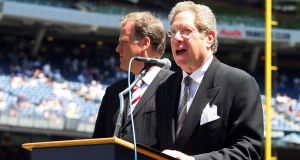 In his first at-bat on Opening Day this year, Giancarlo Stanton smashed the second pitch he faced over the wall for a two-run homer. Exactly the type of monstrous hit and box office moment that the New York Yankees had signed him to deliver, it was an event the club’s radio commentator John Sterling had been preparing for all winter long.

“It is high, it is far, it is gone,” boomed Sterling. “Giancarlo, non si può stoparlo!”

It says much for the announcer’s impact on the city’s popular culture that his dodgily pronounced Italian soon had linguists and baseball fans quarrelling over the meaning of his words. Even after a general consensus was reached that he was trying to say, “he can’t be stopped”, something else remained unexplained.

Why did Sterling use Italian for a player whose heritage is a typically American mix of Puerto Rican, Irish and African-American. After all, surely he knew Giancarlo was a name the player only adopted after a trip to Europe in 2012. Up to then, he’d been known as plain old Mike.

“Well, first of all, I have an Italian girlfriend,” said Sterling, explaining his sudden European turn. “And, secondly, I called Berlitz, and I said, ‘you know, I’d like something quick, that rhymes with Giancarlo’. And I spoke to the Italian master, a gal named Linda, at Berlitz. It took her a few days and then she came up with the saying.”

In this, the week of his 80th birthday, the New York media has run plenty of tributes to a character Deadspin.com once described as “the saddest man alive”, somebody closing in on three decades as the unmistakable voice of the Yankees. The team plays 162 regular season games and he hasn’t missed a single one since 1990.

“Well, yes. Sterling’s distinctive style is not for everyone, of course,” wrote Wallace Matthews, veteran New York sportswriter, the other day.

“To some, baseball games are as serious as a heart attack, with no room for extraneous information or gratuitous laughs. They are the ones who want their broadcasters to turn over an egg timer in the booth to remind them to repeat the score, the inning and the situation at least once every three minutes.

“But for those who see sports the way they should be seen, as fun and games, Sterling’s broadcasts are more like spontaneous symphonies – unpredictable, often meandering, sometimes awe-inspiring and always highly entertaining. And of course, always delivered in capital letters and italics.”

For all the praise of his dulcet tones, and devotees love his greeting of every win with an elongated, “The Yankees win. Thuuuuuuuuh Yankees win”, there are plenty of snarks who chronicle and record every Sterling utterance – not because they are fond of his hyperbole but because they are sick of how plainly inaccurate his calling of the game is.

With Sterling, the moment the ball leaves a bat he resorts to his default description, “it is high, it is long, it is gone!” Even when it isn’t. For those eavesdropping the game in their cars, that doesn’t matter too much. Until they see the highlight reel later and realise the ball was never high, never long and never threatening to be gone.

Even if there are plenty of fans unbothered by his constant exaggerations and routine falsifications, the legion of Sterling critics is led by Phil Mushnick, a New York Post columnist who describes him as “a narcissistic, condescending blowhard”.

Over the years, Mushnick has campaigned against Sterling’s over-rehearsed schtick and preference for using scripted lines instead of actually describing the action happening in front of him. But, more importantly, he has also pointed out that the commentator has often been a shameless shill for the club.

When hundreds of the most expensive seats at Yankee Stadium lay empty game after game because of ludicrously inflated prices that put them beyond the reach of most supporters, Sterling routinely ignored the ugly gaps behind home plate and praised yet another sell-out crowd.

It has been ever thus. Early in his employment by the Yankees, the team was struggling and Sterling blamed the players for the poor run. When the late George Steinbrenner, an owner so legendary and bombastic that he was a character on Seinfeld, heard this, he informed Sterling he had a job for life. That explains why, no matter how many times his version of what is transpiring on the field infuriatingly differs from the reality, he will remain in the broadcast booth as long as he desires.

So, every time slugger Aaron Judge goes yard, he will roll out some variation on, “He’s judge and jury. And this is judgment day”.

Any similar feat by Didi Gregorius yields either, “Yes in-Didi! Gregorius has Yankees fans euphorious!” or “This is the age of Gregorious!”

Now that Clint Frazier has been sent back down to the minor leagues, Sterling thankfully won’t be able to unleash “Downtown goes Frazier! That Fraizah will amaze ya!”

If no catchphrase is too corny, no cliché beyond resuscitation, his defenders point out he does bring colour to the role. Certainly, there are very few commentators in any sport liable to break into song when describing a big score. After former Yankee Yangervis Solarte sent one out of the park, Sterling used lustily sing his surname to the tune of Dean Martin’s Volare.

Non si può stoparlo! As he might say himself.