Great American must wait for her 24th Grand Slam title as German prevails 6-3, 6-3 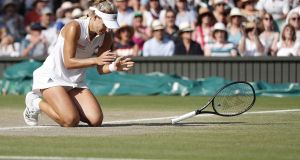 So the storyline of the century lives on. A Centre Court drama that was framed as much by Serena Williams’s failure to win her 24th Grand Slam and equal Margaret Courts all-time record as it was Angelique Kerber’s first singles title at Wimbledon.

A game that teased apart 6-3, 6-3 in Williams hour of need frustrated the American in what was a Hail Mary tilt at the crown just 10 months after giving birth.

But she left Wimbledon charged and confirming that while her priorities have changed towards her daughter, she threatens to come back stronger.

The elemental part of Williams’game was present over the muggy 65 minutes. But it surged and waned. An ace wound her up to screeching pitch, then two double faults for 0-40 struck her tight-lipped and mute.

A jaw dropping backhand pass invited the crowd to become involved and voice their approval, a simple volley at the net into an empty court smashed four feet long. There was wailing as well.

The old game was there but Williams could only express it in incoherent phrases and bit parts. She was struggling to be heard.

With relentlessness and speed, Kerber had the mind to further frustrate. A court architect her angles and stress points were sweetly measured. Her fetching made Williams play more shots and make more errors and her returns were challenging and deep.

Exploiting the knowledge that Williams was not tournament fit, Kerber worked the seven-time Wimbledon champion side to side as well as in and out. Drop shots followed forehand drives and when on occasion the German was exposed, Williams fluffed her lines.

Williams hit more than twice as many winners, 23 to Kerber’s 11. But she blew out 24 points on unforced errors while Kerber contained hers to just five over 18 games.

In previous matches Williams was winning upwards of 80 per cent of her first serves. Against Kerber it fell to 63 per cent, her second serve winning just four points from 13 serves, a miserable 31 per cent.

“I just feel like I’m taking the steps in the right direction. I took a giant step at Wimbledon,” added Williams. “But my journey has just began. Just have to keep going. My priority is my baby, you know. Just being with her, doing things with her, spending time with her. That’s totally my priority. But it’s weird. I set my schedule so I have time. Like, I train in the morning. I spend the rest of the day with her.”

When you sit Olympia down and tell her the story of playing in front of two Duchesses, Meghan Markel and Kate Middleton and sporting royalty what will you tell her, Williams was asked.

“Well, I think it was a happy story,” she said. “I’ll probably change the ending.”

The 11th seed Kerber, winning her third Grand Slam title after the Australian Open and the US Open in 2016, became the first German winner at Wimbledon since Steffi Graf in 1996.

“We tried to improve my tennis from the beginning of the year to being more aggressive,” said Kerber. I was trying to not think too much that I was playing against Serena. I was trying to stay on my side of the court. Stay little bit cool. Not too much emotion.”

For Williams this is only her seventh loss in 30 major finals. She also beat Kerber in the 2016 Wimbledon final, taking 81 minutes compared to 65 minute to lose on Sunday.

A lot has been made of her coming into Wimbledon underdone but at 36-years-old and turning 37 in September the inevitability of natural decline may have played a part.

In that regard her genetics appear good to continue. Her older sister Venus played in the Wimbledon final of 2017 at 37 years and 29 days. Only Martina Navratilova has done better, playing in the 1994 final aged 37 years and 258 days.

Then again for the African American from a Los Angeles ghetto, her age, her motherhood, her injuries are all just another challenge waiting to be beaten down.

“I just like to tell all the moms, I had such a long struggle to come back and it was really difficult,” she said. “Honestly, I feel like if I can do it, they can do it. I’m just that person, that vessel, that’s saying, you can be whatever you want to be.”

Being Serena. None can do it better except Kerber this time.