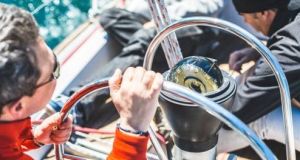 The fleet at Crosshaven has also produced a strong turnout for its “no-pro” Beaufort Cup for emergency services personnel. Photograph: Getty Images

Next week’s Cork Week Regatta will see Co Wicklow’s first ever entry into a buoyant Class Zero for the biennial Cork Harbour event.

Changes may be afoot at the 110-boat festival, but one thing that stays the same is Royal Cork Yacht Club’s ability to attract a sizeable “big boat” following.

Frank Whelan’s Grand Soleil 44 Eleuthera took the bulk of Dún Laoghaire Waterfront honours in June, but Whelan’s crew boss Paddy Barnwell is the first to admit that Crosshaven presents a much sterner test.

Whelan’s Dutch rocket ship, formerly known as Homatrol, is no stranger to the podium, especially if, as forecast next week, light to moderate winds prevail at Crosshaven. A real winner 15 years ago, the 2003-Italian built Judel Vrolijk design was a Cowes Week 2003 winner, and also a Fastnet Race class winner that year. Eleuthera’s crew is largely made up of Greystones Harbour sailors. Paddy Barnwell runs the boat and crew, comprising young dinghy racers from the ranks of the RS 200 and RS400 fleets.

Whelan will also be up against some familiar competition from Dublin Bay’s Wow (George Sisk), and for this regatta the Farr 42 crew is beefed up by Cork Harbour professional and four-time Olympian Mark Mansfield.

The exciting fleet of up to 10 “big boats” will rekindle interest in the 40ft division that only Cork Week has been able to muster and also from sailing centres from right across the Irish Sea.

Until now the Zeros have been a fleet on the wain, as evidenced by numbers appearing across a packed June calendar. Howth’s Wave Regatta had three entries, the National Yacht Club Regatta had seven, both the Royal Irish Yacht Club and Royal St George YC had four, as did last week’s Bangor Town regatta.

The fleet at Crosshaven has also produced a strong turnout for its second edition of the “no-pro” Beaufort Cup for emergency services personnel that races as part of Cork Week.

It looks like J109s will be setting the pace here. East coast J109 champion Andrew Algeo’s Juggerknot will race as RNLI Baltimore. Barry Byrne’s Joker II that took second overall in last week’s Round Ireland Race with a Defence Forces crew, is back again to defend its Beaufort title. Significantly, also competing is the Royal Navy Sailing Association’s Jolly Jack Tar, an entry that won the UK’s J109 National Championships in May.

Ballyholme’s Liam Glynn added to Irish youth sailing honours when he won bronze at the U-21 Laser Worlds in Poland. The top result saw the former Topper world champion compete in tricky conditions in a fleet of 133 competitors drawn from 40 countries. The result qualifies Glynn for the Sailing World Championships next month in Aarhus, Denmark. Two other Irish Laser sailors made the Gold Fleet at Gydnia, with Johnny Durcan placed 40th and Ewan McMahon 44th.