Donald Hall was a far better wordsmith than second baseman 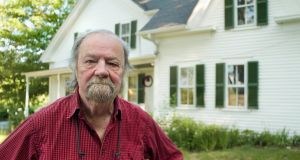 In the early seventies, Donald Hall tried out to play second base for the Pittsburgh Pirates. On the first morning of spring training, during just his second lap of the diamond, two catchers spotted his obvious physical distress, picked him up by the oxters and carried him all the way to home plate. A middle-aged curiosity, tipping the scales at 18 stone, when it was his turn to bat, the whole team used to gather around the cage to marvel at his sheer athletic awfulness. Jaded baseball players, they had seen everything except the spectacularly awkward swing of a bearded poet suddenly cast in their midst.

It had been a literary agent’s idea to set Hall loose in the game he loved and, while he was eventually cut for not being able to bend down properly, the book that resulted from his experience was not quite what anybody expected. Dock Ellis in the Country of Baseball was a collaboration with an eccentric and articulate Pirates’ pitcher that became a rather unique addition to a sport with a literary canon like no other. A fascinating rumination on life for a black athlete in America in the Nixon era, in later editions, Hall revealed Ellis had pitched a no-hitter against San Diego in 1970, the signature moment of his career, while under the influence of LSD.

That impressive counter-cultural footnote crept into some of the obituaries following Hall’s death at the age of 89 last weekend. Old enough to have once played softball with Robert Frost (“He played a vigorous game but he was also something of a spoiled brat”), he was a former poet laureate, author of over 50 books, and generally regarded as one of the great American writers of the modern era. Run your thumb along the pages of his back catalogue, however, and baseball spills out into the margins of his poetry and prose. Witness his elegiac remembrance of listening to games on the radio as a child.

“We listened on the dark screen porch, an island in the leaves and bushes, in the faint distant light from the street, while the baseball cricket droned against the real crickets of the yard,” wrote Hall. “We listened while reading newspapers or washing up after dinner. We listened in bed when the Tigers were on the West Coast, just hearing the first innings, then sleeping into the game to wake with the dead gauze sound of the abandoned air straining and crackling beside the bed.”

Born in New Haven, Connecticut, in 1928, he spent large portions of his childhood at a family farm in New Hampshire and rural life, in all its fleeting seasonal glories and inevitable decay, would be the recurring theme of his remarkably candid work almost since he declared himself a poet in his early teens.

Educated at Harvard, he also studied at Oxford University where he won the Newdigate Prize, an accolade previously awarded to Oscar Wilde. He did a stint as professor of English at the University of Michigan and served as poetry editor of The Paris Review where a recently rejected Allen Ginsberg once complained Hall “wouldn’t know a poem if it buggered him in broad daylight”.

In 1975, he gave up academia to live on the family homestead on Eagle Pond Farm where he made a freelance living, producing books on subjects ranging from the sculptor Henry James to the poet Marianne Moore to his own beloved Boston Red Sox. His dabbling in sports writing baffled many of his more heavyweight literary contemporaries although he reckoned half of them were just jealous that he got to hang out with cool athletes.

“Writing about baseball was one kind of writing,” he said, “in which the research was a tremendous amount of fun”.

Like so many men of his generation, he was an unapologetic snob about his first sporting love, describing baseball as “the preferred sport of American poets” and dismissing basketball and football as lesser pursuits because they generate too much of what he derided as “penis-envy prose”. He gained a modicum of wider televisual fame in the 1990s with a couple of impressive cameos on Baseball, Ken Burns’s epic documentary series and extended love letter to the game.

“Baseball is fathers and sons,” wrote Hall. “Football is brothers beating each other up in the backyard, violent and superficial.”

His long-standing antipathy towards grid-iron also inspired Olives, an acerbic poem in which he recalled enviously watching high school football stars making out with “magnanimous cheerleaders” at house parties on the Friday nights of his youth in Connecticut. In the final stanza, he imagines how these now “obese halfbacks wheeze upstairs to sleep beside cheerleaders waiting for hip replacements”.

Over the past few days, fittingly, it’s been his various paeans to baseball rather than his mockery of other codes that have cropped up in the revisiting of his immense body of work.

“It is by baseball, and not by other American sports, that our memories bronze themselves,” wrote Hall. “Other sports change too fast, rise with the high-rise, mutate for mutability, modify to modernise. By baseball we join hands with the long line of forefathers and with the dead.”

A far better wordsmith than a second baseman.