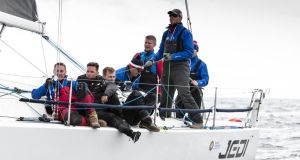 The combined fleets at Volvo Cork Week will compete in today’s midseries Harbour Race with a massed start off Roche’s Point and sail past Cobh, after two key results in the offshore phase were decided on Tuesday.

The Fastnet 24-hour race for the military and rescue services crews competing in the Beaufort Cup was decided in a cliff-hanger conclusion that saw Simon Coveney drop from first place to third just a few hours before the finishing line. Having led the race to the Fastnet and back as far as Kinsale, his Defence Forces team opted for an inshore route out of the tide, but it emerged that the offshore route had more wind. That handed the advantage to Comdt Barry Byrne on Joker 2, who had steadily crept up the rankings from fourth place at the famous lighthouse and into contention, mirroring the 2016 inaugural race.

Joker 2 went on to take first place, followed by the Baltimore RNLI lifeboat team on Andrew Algeo’s Juggerknot, who had also taken the offshore route.

Meanwhile, Irish Sea Offshore Racing Association champions Peter Dunlop and Vicky Cox on Mojito emerged best of the coastal racers by winning the overall Wrecks Series of the week. Like the Beaufort Cup fleet that is dominated by J109 class boats, Mojito is a sister ship and leads a trio of J109’s in Class 1 that may make them early contenders for the overall trophy for the week.

However, with today’s Harbour Race, just three races will have been sailed and the remaining two days of the series are scheduled to have three inshore races held each day. So, while some classes may have clear early leaders – such as Mojito, who are coastal specialists – the week may yet turn on what happens on Thursday and Friday’s shorter races with fast-paced action.