Mohammed Amir stars for Pakistan as India crushed at the Oval 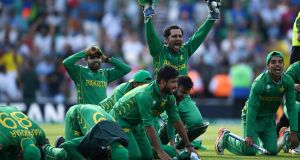 A brilliant opening spell by Mohammed Amir followed by a near flawless performance in the field led to Pakistan taking the Champions Trophy with astonishing ease. They won by 180 runs against an Indian side widely tipped to prevail before the start.

Even after Pakistan had chalked up 338, which owed much to a barnstorming century from the new boy, Fakhar Zaman, there was still the feeling that the target was well within India’s compass, especially given Virat Kohli’s incredible record of scoring runs when chasing.

But Amir, who had to miss the semi-final because of back spasms, soon banished these thoughts with bowling of such quality that it conjured up memories of Wasim Akram in his pomp.

The classic in-swinger accounted for Rohit Sharma, who was lbw to Amir’s third ball. Out came Kohli. Soon the India captain pushed forward and edged to first slip where Azhar Ali juggled and dropped a straightforward catch. Azhar slapped the turf in exasperation and his teammates were none too pleased either.

In came Amir again and this time Kohli spied runs on the leg-side to rub salt into the wound but the ball took the leading edge and flew to backward point where Shadab Khan make no mistake. Jubilation was mixed with relief amid the celebrations of the Pakistan team. Soon to follow was Shikhar Dhawan edging a snorter to the keeper.

India were 33 for three but they had the vast experience of Yuvraj Singh and MS Dhoni at the crease. Yet experience is not everything. Up stepped Shadab, an 18-year-old seeking to master cricket’s most difficult art: wrist spin bowling.

He propelled a leg break, which took Yuvraj’s front pad but the appeal was rejected. Shadab, despite - or as a consequence of - his youth insisted upon a review and Sarfraz Ahmed, the captain, had the good sense to consent. Yuvraj had to go grumpily. In the next over Dhoni hooked in the air and was caught on the leg-side boundary.

At 54 for five it was all over barring a miracle but Hardik Pandya briefly threatened one. He hit three consecutive sixes off Shadab (but Sarfraz kept him on for another over anyway). There were two more off Fakhar, who had been pressed into service as an emergency left-arm spinner because of an injury to Imad Wasim.

Pandya had sped to 76 from 43 balls with Ravindra Jadeja a silent partner. They had added 80 in less than 10 overs when India’s fate was sealed. There is nothing more morale-sapping than a daft run-out, which sacrifices the only hope of victory. Now the two batsmen ended up at the same end but it was the explosive Pandya rather than Jadeja who had to go. In the circumstances Jadeja should have sacrificed himself but this did not appear to occur to him.

So mighty India subsided against a team ranked No8 in the world, which they had crushed just over a fortnight ago. Pakistan had delivered a thrashing that no one had expected, which made it all the more mesmerizing.

There has been an endearing serendipity about Pakistan throughout this tournament. It does not feel as if they have been plotting their campaign for the past two years whereas there is the impression that Andrew Strauss and Eoin Morgan have been thinking of little else.

Out of nowhere they have plucked Fakhar to open the batting. He was omitted from Pakistan’s first game of the tournament - that defeat against India - and then made his debut in their second against South Africa. Since then he has yet to fail, although he appeared to do so on Sunday. On three Fakhar edged a wide delivery from Jasprit Bumrah into the safe gloves of Dhoni and set off dolefully to the dressing room. But in the 21st century there is always the outside chance of a resurrection. It transpired that Bumrah had overstepped.

Initially there was no great expectation that Fakhar would make the Indians pay for this. Most of his early runs came from the edge of his bat; then there would be an eyebrow-raising boundary of great audacity. One moment Fakhar resembled a club cricketer caught up in a dream-like sequence, which found him playing in a final watched by an enormous worldwide audience; the next he whipped the ball through the gaps like Brian Lara.

The opening pair added 128 together and were separated only by a run-out. Azhar Ali had progressed just as quickly as Fakhar, though with greater orthodoxy, when the two batsmen found themselves at the same end. Fakhar might have been distraught at this mix-up, which had culminated in the sacrifice of a senior player. Instead he seemed galvanized.

Fakhar played the two Indians spinners brilliantly often with whipped drives that suggested he must have been a great hockey player in his youth. Sometimes he found the gaps; sometimes he simply cleared the boundary. Ravi Ashwin and Jadeja would bowl 18 overs for no wickets conceding 137 runs and it was Fakhar, an unknown bystander three weeks ago, who set the tone.

In his wake there were handy contributions from Babar Azam and Mohammad Hafeez whose 57 from 37 balls was suitably skittish especially for someone who is known as “The Professor”. The last 10 overs yielded 91 and Pakistan had set a target that had never been achieved in the final of an ICC tournament, a record that remained intact at the end of a very surprising afternoon. Guardian Service