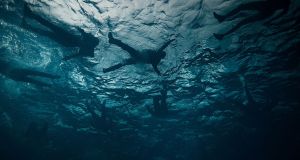 Float to live: Fight your instincts, not the water. The RNLI has issued tips on how to give yourself a better chance of survival. 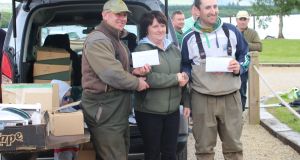 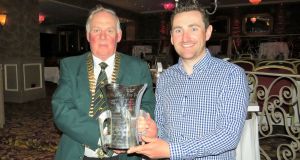 ITFFA president Albert Berry presenting the cup to Darren Maguire after his victory at the 84th National Championships at Lough Owel. 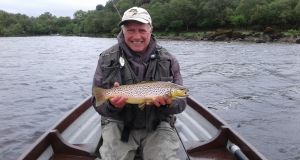 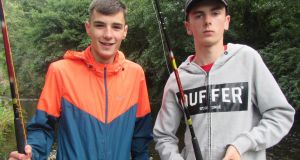 The Atlantic Salmon Trust (AST) is hoping to reverse a century of decline in wild salmon numbers by announcing a major new study into their movements.

Often called the ‘aquatic canary’, Atlantic salmon are regarded as key indicators of the health of our waters as they are sensitive to changes within the environment. In recent years numbers have been dropping at an alarming rate and one major area of concern is the mortality of juvenile salmon during their long migration at sea before returning to rivers as adults.

The AST is hoping to reverse that decline with a new Suspects Framework study, which was announced at a symposium and gala dinner to mark its 50th anniversary, attended by AST Patron Prince Charles and King Harald V of Norway.

In his speech, Prince Charles said: “Our greatest concern is that today a very small proportion of salmon smolts leaving their rivers return as adult salmon.

“Thirty years ago one in four would make it back. Today, it is only one in 20, yet we do not know why this has happened and until we do we will not be able to put solutions in place.”

Professor Ken Whelan, research director of AST, said: “Scientists are increasingly concerned about the future of the wild Atlantic Salmon, which was once so numerous in our rivers that it was seen very much as a staple diet for major population centres across Europe.

“Just 20 years ago, if you recorded 100 juvenile salmon leaving a river, more than 20 would return as an adult fish to spawn. In most rivers, fewer than five now return.

“We are determined to rescue this most valuable species and hope that the study we are announcing today will lead to an international framework that will give us the information we need to achieve this.”

A fundraising auction held during the gala dinner generated more than £300,000 to help pay for the research. Star item was a Hardy’s Hotspur Cascapedia Salmon Reel, numbered 001, which sold for £55,000 – thought to be a world record for the sale of fishing tackle.

It is the first time in 180 years Hardy’s has chosen to release any reel 001 for sale, with every previous production held in its museum. Reel 000 of the Hotspur Cascapedia was presented to the Prince of Wales, with 002 being handed to King Harald V of Norway.

Also auctioned was a watercolour painting of Lochnagar by the Prince of Wales, which fetched £4,000.

The AST was formed in 1967 with the purpose of protecting the species from distant water fisheries and disease. It was notable as one of the first organisations dedicated towards the welfare of a single species.

Through work with its honorary scientific advisory panel and extensive awareness raising, it has helped reduce some of the threats to the species. However, with numbers continuing to decline, it hopes its Suspects Framework will identify the exact causes leading to increasing salmon mortality.

“Modern technology is enabling us to gather more detailed and precise information than ever before,” said Whelan. “Our aim now is for our framework to be adopted by nations across the Atlantic, allowing us to build the most detailed picture yet of the threats – and hopefully opportunities – for this species. Through this research initiative we are determined to boost the numbers of smolts making it to the feeding grounds.”

Likely suspects identified by AST in preparing the framework include predation from species such as seals, cormorants and dolphins, the impact of aquaculture through sea lice, pollution, disease and escapees, by catch from fishing fleets, overexploitation and overfishing of the juvenile salmon’s staple diet, climate change and moving sea currents.

Sarah Bayley Slater, executive director of AST, said: “Because farmed salmon is now so commonplace in the supermarket, many people are unaware of the plight of the wild Atlantic salmon for which Scotland and Norway are so famous.

“This study will help us identify the key suspects causing these high mortality rates, which will help us to stabilise and over time, reverse the decline of this important species.”

“Our patron, the Prince of Wales has been a very active supporter of AST and has contributed considerably towards this effort. The Prince’s International Sustainability Unit has been working closely with us to look at the problems facing wild Atlantic salmon and remains a key contributor to this study.

“We are very grateful for this support, which is a considerable help as we aim to find a way to reverse the species’ continued decline.”

For more information about the study, visit the Atlantic Salmon Trust website.

Dublin Angling Initiative (DAI) is up and running again for 2017 with its primary aim to promote angling among young people in target communities.

Last year, over 500 teenagers participated in the programme which included fishing trips and environmental talks around important issues such as conservation, water quality and fisheries protection.

The DAI, run under the auspices of Inland Fisheries Ireland, has seen thousands of young people participate since its inception over 20 years ago. Enquiries are always welcome in relation to the programme and availability will be on a first come, first served basis.

IFI’s Suzanne Campion, said: “We already have schools, scout troops and youth projects booked in for fishing lessons and practical field trips during the summer months.”

In its May bulletin on water safety, the RNLI has issued tips on how to give yourself and others a better chance of survival in the water. Under the heading, Float to live: Fight your instincts, not the water, it asks the question: ‘You fall into the water unexpectedly. What do you do? Swim, panic or float!’

Many people would fight the effects of cold water by swimming hard or panicking – two potentially life-threatening instincts that can quickly lead to drowning. Floating until the cold water shock passes could save your life.

As part of the respect the water drowning prevention campaign, the RNLI is urging water users to remember one simple skill – floating. To learn how to float, see the short film and interactive guide by contacting RNLI in Swords, Co Dublin at 01-890 0460.

Changeable weather on Mask resulted in mixed angling reports. Scotland’s John Webb and Mike Donaghy made their annual pilgrimage and had some excellent sport on wets and dries with Ronan Cusack. The most memorable day in a light breeze and bright sun they managed nine good fish on dries, two of which were taken off the shore during lunch.

The Mayfly Challenge Pairs Competition, hosted by the Irish Disabled Fly Fishing Association (IDFFA), was held recently on Lough Erne and while conditions were somewhat blustery on the day, the event attracted 35 anglers to compete for the first prize of £1,000.

The IDFFA would like to thank their sponsors for without them they could not run this competition.

Incessant rain greeted the 125 anglers at Lough Owel last weekend for the 84th ITFFA National Championships. However, the day-long downpour did little to deter Fermanagh angler Darren Maguire who, on his first attempt, took top honours with five fish for 3.1kg.