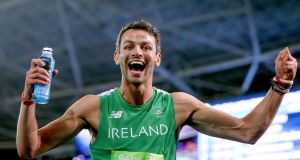 It was a properly star-studded race and Thomas Barr produced his now trademark finishing surge to nail third place in the 400 metres hurdles at the Bislett Games in Oslo – his first Diamond League race of the season.

The home crowd were treated to a quite astonishing victory by 21-year-old Karsten Warholm, who set a Norwegian record of 48.25 seconds when taking the win. Running in the lane seven, Warholm set the tempo throughout, Olympic champion Keron Clermont among those to falter over the homestretch, finishing last in 50.52.

Barr held his nerve and his stride, despite running in lane one and therefore always chasing, and yet just like in the Rio Olympics last summer, finished as fast as anyone – getting up to third in 49.95, a season best. Yasmani Copello from Turkey, the man who edged Barr out of the bronze medal in Rio, took second in 48.44, also a season best.

Warholm was the hero, however, and having already run 44 seconds for the 400, flat this season, Norway have clearly found themselves a new athletics star. Still it was a highly satisfying run for the 24 year-old Barr, given he also took the scalp of the Olympic champion, Clermont, who hit a hurdle badly coming off the last bend, with 2014 European champion Kariem Hussein from Switzerland also well behind Barr in sixth.

Caster Semenya also maintained her unbeaten start to the season with another devastating display in the women’s 800m, the South African woman taking the win in 1:57.59.