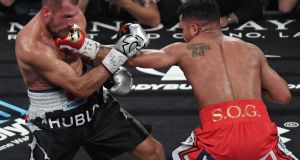 Andre Ward proclaimed himself the pound-for-pound world number one after stopping Sergey Kovalev in their rematch to retain his unified light-heavyweight world championship.

An eighth-round win via a controversial technical knockout took Ward to 32 wins from 32 in his career and the 33-year-old then set his sights on climbing the weight classes.

Speaking to HBO after the fight, he said: “Let me ask you the question: Can I get on the pound-for-pound list now? At the top?

“Hopefully, against a great fighter like Sergey Kovalev, we’ll get our credit tonight and get atop that pound-for-pound list.”

He said of his future plans: “Maybe cruiserweight, I don’t know. Cruiserweight, heavyweight, that’s always been a dream of mine. I dream big and anything is possible.”

An impressive performance from Ward was marred by the ending to the fight, with a succession of borderline low blows securing the stoppage after he had initially rocked the Russian with a powerful straight right to the head.

Kovalev was aggrieved at losing the pair’s first meeting last November having knocked Ward down in round two, and again he was frustrated at the stoppage.

“Only a low blow (hurt me),” he added, before watching video of the end of the fight and observing: “Low blow — and I felt this. Again, another one. The first one was on the border, and the second one a low blow.”

Ward was unrepentant when watching the same footage.

“When I saw him react to the body shots that were borderline, I knew I had him,” he said. “Go back down there. Why get away from it?

There had already been controversy on the undercard as Guillermo Rigondeaux knocked out Moises Flores right at the end of the first round to retain his WBA world super bantamweight title.

The verdict was only confirmed after a long review during which referee Vic Drakulich initially suggested he would rule the fight a no-contest, due to Rigondeaux holding Flores behind the head and possibly landing the knockout punch after the bell, while Flores was criticised by some observers who suggested he had exaggerated the effect of the knockout punch.