Opening three races of F1 season under threat from coronavirus

Spread of virus in Italy and Japan has resulted in concern the races in Australia, Bahrain and Vietnam may be affected 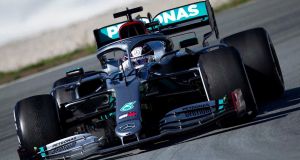 The opening three races of the Formula One season are coming under increasing threat of cancellation as the coronavirus outbreak continues to spread outside China.

The Chinese Grand Prix has already been postponed but the spread of the virus in Italy and Japan has resulted in concern that the meetings in Australia, Bahrain and Vietnam may also be affected.

On Wednesday, Ferrari announced the suspension of non-critical business travel and the restriction of external access to its factory in Maranello, located 140km from the epicentre of the outbreak in Italy in Codogno.

There have been 322 cases of the coronavirus in northern Italy and 12 deaths.

The Alpha Tauri team are also based in Italy in Faenza, 200km from Codogno.

As is tradition, the Australian Grand Prix is the first race of the season, and is scheduled to take place in Melbourne on March 15th. It will be followed a week later by the Bahrain GP on March 22nd, with the Vietnam GP set to take place in Hanoi on April 5th.

Andrew Westacott, chief executive of the Australian Grand Prix corporation, has said they would take government advice on hosting the race as the situation develops.

“It’s much broader than a question for us and F1,” he said. “We take guidance from the chief medical officers in Australia and ultimately from government. Government and health officers will look at things medically and economically and assess risk.”

Essential to any decision making will be an assessment of whether or not to allow access for personnel or fans arriving from areas affected by the coronavirus.

All three opening rounds may have restrictions in place, making them going ahead as scheduled untenable. As well as the outbreak in Italy putting Ferrari and Alpha Tauri at risk, Japanese manufacturer Honda provides engines for both Red Bull and Alpha Tauri, and Japan has suffered 178 cases with two deaths.

It is understood Honda will keep some of it staff in the UK after the second test, currently taking place in Barcelona, so they will not be flying from Japan to Australia.

Vietnam announced it had completed building its circuit in Hanoi on Wednesday, and the chief executive, Le Ngoc Chi, insisted the race was still on schedule.

“The F1 race in Hanoi in 2020 will take place as planned,” she said. “We are of course monitoring the situation closely, and will notify customers and media should there be any changes.”

However, earlier this week authorities postponed the International Challenge badminton event set to take place in Hanoi the week before the Grand Prix, with strict health restriction cited as the reason.

The prime minister, Nguyen Xuan Phuc, has applied a policy of refusing entry to any person attempting to enter Vietnam who is coming from an area affected by the coronavirus, including Japan and Italy.

Bahrain has 26 cases of the coronavirus. It has temporarily suspended all flights entering from Dubai and Sharjah. Public and private schools and nurseries have also been closed for two weeks.

The FIA and F1 have said they are monitoring the situation, with the FIA reiterating its intent to put safeguarding the motor racing community and the public first.