Olympics News: Games set to go ahead in June, although some qualifying events hit 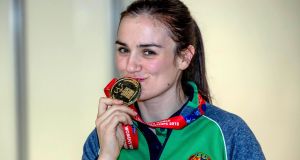 Irish world boxing champion Kellie Harrington: The Ireland boxing squad have had to cut short their training camp due to the outbreak of the coronavirus in Italy. File photograph: Morgan Treacy/Inpho

While the Japanese government remains steadfast in its preparations for this summer’s Tokyo Olympics, concerns over the spread of the coronavirus continues to impact on athlete and team preparations.

The Ireland boxing squad, who were preparing in Assisi for next month’s Tokyo qualifying tournament in London, have cut short their training camp due to the outbreak of the coronavirus in Italy, returning to Dublin on Wednesday afternoon.

Tokyo medal hopes Kellie Harrington and Kurt Walker are among the squad who were in a two-week camp, along with athletes from Finland, France, India, Moldova, Switzerland, New Zealand, Romania and Russia, and decided against taking any risk even though Assisi, in the central region of Umbria, is some distance from the affected Lombardy region.

Earlier this month the Ireland women’s hockey team were forced to cancel a pre-Games training camp in Malaysia (from March 16th to April 5th) due to the spread of the coronavirus in that country, and have now relocated that camp to Durban, South Africa from the end of March, where – with some gentle irony – they have lined up games against China and Japan.

Several Olympic qualifying events have already been moved or postponed, although it would be late May before anyone in Japan or the International Olympic Committee (IOC) would look at the prospect of reconsidering the Tokyo Games, should the coronavirus still be a serious threat.

Veteran IOC member Dick Pound suggested on Monday that cancellation was the likely option should the coronavirus remain uncontained by then. “In and around that time,” he said of the late May date, “I’d say folks are going to have to ask: ‘Is this under sufficient control that we can be confident about going to Tokyo or not?’”

However, Japanese government spokesman Yoshihide Suga stressed that Pound does not speak for the IOC and there are no plans to cancel or postpone the Games. “With regard to this member’s comment, the IOC has responded that this is not their official position, and that [the] IOC is proceeding with preparations toward the Games as scheduled,” Suga said.

“That is and will be a case for the IOC, in terms of how they deal with [it],” said Sherrard. “The medical advice that is being received via the World Health Organisation and the IOC, to the Japanese authorities, is that the Games will go ahead, while there is likely to be some disruption to some of the qualifying events, the planning around them, and already we’re seeing there are some contingency plans in place.

“We’ve seen a sailing event that was due to be hosted in Genoa has been moved to Palma. But that is something our sports would be quite used to, and able to do, and we’re working closely with our member federations to ensure we can support them in whatever way we can.

“But for the moment the IOC believe the Games will go ahead, while also keeping the situation monitored. With the Irish boxers, they are coming back home to work at the Sports Institute, and that’s the job of performance directors and coaches, to ensure they can continue to prepare. Again, athletes do just limit themselves to the controllables, are very focused, and that doesn’t change by what’s going on around them.”

Sherrard was speaking at the announcement the OFI will fly all Irish athletes in business class in a deal with Qatar Airways to Tokyo, where the Games are scheduled to start on July 24th. While the IOC is still way off considering cancellation, if necessary, it does have an $897 million reserve fund to help finance global sports, established as a backstop for international sports federations that rely on the IOC to balance their budgets.

The IOC made $5.7 billion in its last four-year Olympic cycle, which included the 2016 Summer Games in Rio de Janeiro and the 2018 Winter Games in PyeongChang, South Korea. Of that total, 73 per cent came from broadcast rights and 18 per cent from top-level sponsors.