Europe Letter: ‘When confronted with a crisis, the commission retreats into technicalities’ 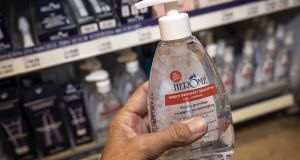 Hand gel: Hand-shaking is something of an occupational health risk. File photograph: EPA

In the literary technique of foreshadowing, small details appear early on in a story that are later revealed to have deep significance to the plot.

On my first week on the job of Europe Correspondent, I found myself wondering what might augur the development of the coronavirus into a major world crisis.

Would it be the bottles of hand sanitiser that appeared around European institutions in Brussels, only to empty within a day?

Was it the discussion of whether to stock up on food that broke out on the family chat group?

Or could it be the note of urgency among journalists as they inquired in press conferences about the travel history of European leaders, and whether they felt in good health?

There are few degrees of separation between members of the world’s governments. They ping-pong between bilaterals, before gathering to all shake hands with each other at councils like the one held for European Union ministers to discuss enlargement and Brexit this week.

Hand-shaking is something of an occupational health risk: disinfectant gel is nothing new to diplomats, who apply it regularly to combat infection risks from the hundreds of hands they clasp in the course of their work.

The World Health Organisation advises that the simple act of hand-washing – especially after any toilet visit, before eating, or touching the face – is the most crucial factor in combating the spread of disease.

But large numbers of Europeans do not automatically wash their hands after toilet visits. According to a 2015 survey by Gallup, 74 per cent of people do so in Ireland, and the worst offenders are the Italians and the Dutch, on just 57 and 50 per cent.

As for wearing face masks, the practice is new outside of Asia and commonly seen as precious. It’s misunderstood: the emphasis is not to protect the individual from the crowd, but rather the opposite. In Japan it’s seen as an act of civic duty, to prevent transmission of germs from the wearer to others.

The issue of coronavirus was to dominate my first attendance of the European Commission’s midday press briefing for journalists, in which spokespeople for the EU’s executive branch make announcements and take rounds of questions on the issues of the day.

On Monday the commission announced a tranche of funding to find a vaccine, and said it was encouraging co-ordination in the response of member states as it awaited the report of a delegation of experts sent to Rome.

The situation was developing rapidly. Italy had responded with gusto to an escalating outbreak, putting entire towns into quarantine and curbing public gatherings across much of its north. There had been ad hoc stops of travellers leaving to Austria and on a bus to France. This raised questions about the endurance of the Schengen Area – the zone of check-free travel that includes most EU countries, though not Ireland. Any closure of borders due to a health crisis would be a first in European history.

But a rapidly spreading virus does not correspond perfectly with the commission’s division of technical specialties.

None of the array of spokespeople dedicated to migration, home affairs, public health, or finance were able – or perhaps willing – to answer the kinds of questions the journalists raised at the briefing: Were member states adequately prepared? Would borders be closed? Are the number of infections in Italy so high partly because it is doing more testing?

A noxious dynamic was evident between the spokespeople and the press pack, as journalists increasingly digressed into little frustrated polemics. In response, officials retreated to repetitious prepared sentences or procedural explanations about the division of powers and competences, with the weary irony of teachers explaining simplicities to a rambunctious class.

“Again, a lot of elements to your question actually, I have to say, only very few of them specifically relate to the rules that govern the Schengen Area as such,” was one typical response.

“We don’t want to have a fight with you, not today,” one increasingly exasperated journalist told the commission officials. “Just in the one hour since we’ve been sitting here, an additional person has died in Italy.”

It seemed an illustration of European paralysis, a phenomenon which limits the bloc’s ability to act even as it professes ambitions of greater influence on global challenges like peace and climate change.

If a problem is big enough, the EU faces expectations that it should act. But when confronted with a crisis, the commission retreats into technicalities and struggles to dynamically respond: a function of the limitations of its powers, as prescribed by EU member states.