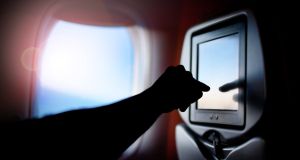 The coronavirus has been blamed for the failure of an Irish in-flight entertainment systems supplier that went into liquidation on Wednesday owing creditors almost €5.3 million.

Creditors agreed to the appointment of accountant Tom Murray of Friel Stafford as liquidator of Wicklow-based Mythopoeia Holdings Ltd at a meeting in Dublin’s Harcourt Hotel.

Those attending the meeting reported afterwards that directors listed a halt in new orders from airlines, following the coronavirus outbreak, as one of the reasons that the company was forced to wind up.

Other airlines with which Mythopoeia has recently done business include St Petersburg, Russia-based Rossiya Airlines and Air Greenland.

A statement of affairs shows that it owes creditors €5.285 million while the assets are estimated to make €600,000, leaving the business with a shortfall of €4.685 million.

According to the figures, unsecured creditors are due €5.25 million. The biggest of these is Wellbeing Financial Services Ltd, owned by Mythopoeia investor and director Maurice Mason, which is due almost €2.2 million.

Trade creditors are due about €3 million of the total. These include AIB Finance and Leasing, owed €69,000, lawyers William Fry, due €14,760, and aircraft maintenance specialist SR Technics, which is owed €361,117.

Five workers – classed as preferential creditors, which means they are entitled to be repaid before unsecured debts – are due more than €15,700. Mythopoeia owes the Revenue Commissioners €13,000 in income tax and social insurance.

Accounts for 2018, the last year for which figures are available, show that Mythopoeia Holdings had accumulated losses of €4.2 million.Wellbeing Financial Services was due €900,000 on December 31st, 2018, according to those accounts, while the company owed directors €200,000.

1 British exceptionalism backfires in style as Johnson tests positive for coronavirus
2 Wetherspoon’s panto-villain chairman may have the last laugh
3 UK needs to be honest about its Covid-19 strategy
4 Will Covid-19 force Primark to rethink decision not to sell online?
5 Retail landlords worried rents will dry up during Covid-19 crisis
6 Remote working doesn’t suit everyone, and it exposes woolly leadership
7 Rivian takes on Tesla with big batteries and subtler approach
8 Usit travel group in liquidation due to coronavirus crisis
9 Interim examiner appointed to food distribution companies
10 Mobile, broadband suppliers to be given extra radio spectrum
Real news has value SUBSCRIBE