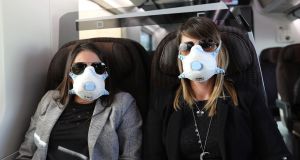 Two passengers wear protective masks as they travel on a train from Rome to Milan in Italy. Photograph: Marco Di Lauro/ Getty Images

The coronavirus epidemic has continued its global spread, with Latin America and Pakistan recording their first cases and the World Health Organisation reporting that cases are growing faster outside China than within it.

Though Ireland remains free of confirmed cases, widening concern over the threat posed by the virus has forced the cancellation of next month’s Ireland-Italy rugby games and may impact other mass gatherings, including the St Patrick’s Day festival.

There was confusion too among schools with students returning in recent days from ski trips in areas of Italy affected by coronavirus clusters. Some schools sent pupils who had been in Italy home for several days as a precautionary measure, while in other schools, students, assuming they were well, were required to attend classes.

Public health doctors are bracing themselves for a big increase in testing requirements following the decision to expand the list of at-risk regions for travellers. Previously, just China was referenced in Department of Foreign Affairs travel advice on coronavirus, but this list has been expanded to include Japan, Hong Kong, Iran, Singapore, South Korea, as well as four regions in northern Italy where restrictions have been imposed, and which have direct flights with Ireland.

The National Reference Virus Laboratory in University College Dublin (UCD), the only testing location for the virus in the Republic, currently provides a same-day service where samples are delivered in the morning. Up to now, 90 tests have been carried out, and all have proved negative.

Responding to a claim that doctors were having difficulty accessing tests, the Department of Health said that anyone who required a test would have it performed “without delay”. “There is no capacity issue related to testing,” a spokeswoman said.

The Irish Rugby Football Union (IRFU) called off the Ireland-Italy matches planned for next month following a meeting with Minister for Health Simon Harris and his officials on Wednesday. Fans who were due to attend the matches – men’s, women’s and under-20s – will be offered tickets for a rescheduled game or a refund.

Decisions on whether other mass gatherings can go ahead or should face restrictions will be made by public health officials based on criteria used internationally. The Cheltenham horse racing festival next month is not affected at present, chief medical officer at the Department of Health Dr Tony Holohan clarified.

Dr Holohan also said Ireland’s current approach of containment would remain in place even if an isolated case occurs here, and would change only if a significant number of cases were reported. As of Wednesday evening, there were no confirmed cases in the Republic or in Northern Ireland.

Meanwhile, a senior doctor has expressed concern over Ireland’s ability to deal with even a small number of severely ill patients in the event of coronavirus cases occurring here, due to a lack of intensive care beds in the system and the high mortality associated with the disease in severe cases.

Dr Michael O’Dwyer, an anaesthetist at St Vincent’s University Hospital, said intensive beds in his hospital were running at “110 per cent capacity” and there would be no space to accommodate an inflow of severely ill coronavirus patients.

“I haven’t had a bed free since Christmas and on most days I’m running two over [capacity],” he said. “There is no way these beds would be free if the virus comes here.”

World stocks tumbled for the fifth day on fears of prolonged disruption to global supply chains, while gold rose back towards seven-year highs.

The US Centers for Disease Control and Prevention urged Americans to prepare, saying that while the immediate risk there was low, the global situation suggested a pandemic was likely.

China’s National Health Commission reported another 406 new infections on Wednesday, down from 508 a day earlier and bringing the total number of confirmed cases in mainland China to 78,064. Its death toll rose by 52 to 2,715. The WHO said only 10 new cases were reported in China on Tuesday outside Hubei province.

Coronavirus: Managing the surge in cases is a day-to-day battle