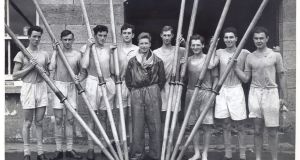 The UCD eight which won the Junior Championship of Ireland (then an adult grade) in 1947.

The glories of 2017 may still be fresh in the memory, but this weekend is all about the 2018 season for ambitious Irish rowers. Some 230 athletes have entered the Irish Trial this weekend at the National Rowing Centre in Cork.

The World Championship gold medallists Paul O’Donovan and Shane O’Driscoll and Mark O’Donovan and their fellow finalists Sanita Puspure and Denise Walsh head the list of entrants. However, the two-day event, with crews racing over 6km in time-trial format, is perhaps the place where young competitors, who make up the bulk of the entry, can catch the eye of high performance director Antonio Maurogiovanni and his team of coaches.

Racing on Saturday will be in pairs and single sculls, while crews will be formed on Sunday.

Ireland coach Dominic Casey has been nominated for World Coach of the Year – the second successive year in which he has made the shortlist. Casey led an Ireland lightweight team which won medals at every major international regatta at senior and under-23 level. Ireland finished sixth in the medals table at the World Championships.

Casey is not exactly chomping at the bit to walk onto the stage at the gala awards in London on December 8th. “I’m not a man for awards,” he says.

He has also been nominated for Distinguished Service to International Rowing. Also on this list is Morten Espersen, the former Ireland high performance director.

The Ireland lightweights who competed in the Fours Head of the River in London last weekend were undone by steering difficulties. Their rudder jammed early in the race, and the test for Gary O’Donovan, Mark O’Donovan, Shane O’Driscoll and Niall Kenny was just to complete the course. They were placed 15th in this time trial event.

UCD Boat Club celebrates 100 years in existence on Thursday, November 16th, with a dinner at O’Reilly Hall. There will be well over 400 attendees, which will include 50 past captains, nine past presidents along with Olympians, World Championship medallists and winners at Henley Royal Regatta.

One man whose life stretches back almost to the start is 91-year-old Michael Cleary, who is flying in from the US to be at the dinner. He represented the club in the Gannon Cup, Irish Championships and Henley from 1947 to 1952. He became a medical doctor, and served in Australia and the United States, always keeping an interest in UCD rowing. He retired just last year.

The Blitzit of indoor rowing at Trinity College last weekend was a success. Hundreds of competitors, some coming long distances, competed. The next such chance for young people is the inaugural Cork Blitzit next Friday, November 24th, at Neptune Stadium.

The Provinces Irish indoor rowing competition in Limerick holds pride of place on the following day. One of the entrants will be Damian Browne, who is set to compete in the Atlantic Challenge rowing race which begins on December 12th. Browne, who is almost two metres tall and weights 124 kilogrammes (19st 7lbs), has a good ergometer time of 6:13 for 2,000m.

He has been impressively professional in both raising money for his charities – which could come in at over €60,000 – and in race preparation. He hopes to post video pieces while he races.