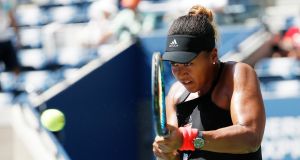 Naomi Osaka hits a return to Lesia Tsurenko of Ukraine during their quarter-final match. Photograph: PA

Naomi Osaka means business as she attempts to win her first grand slam title at the US Open.

The 20-year-old powered past Ukraine’s Lesia Tsurenko, who later revealed she was struggling with a virus, 6-1 6-1 in just 57 minutes to reach her first slam semi-final.

It was the third match this fortnight that Osaka has won in less than an hour and followed on from her battling victory over fellow young gun Aryna Sabalenka, which left her in tears.

Osaka said: “It means a lot but I was much more emotional for the quarters. And now I feel like it’s sort of business again.

“Quarters was my mental goal, every time I played a grand slam. And then after I went into the quarters, I want to keep going, so I feel like I have to be focused again and keep trying really hard.”

Osaka admitted after beating Sabalenka that the emotion was partly a result of the crushing disappointment she suffered two years ago when she was beaten by Madison Keys from 5-1 up in the deciding set.

And it is Keys, the highest seed left at 14, who Osaka will face next after last year’s beaten finalist powered past Carla Suarez Navarro 6-4 6-3.

Osaka has been earmarked as a future star for several years and made her big breakthrough in March by winning the prestigious WTA Tour event in Indian Wells.

She said: “I think winning in Indian Wells helped me a lot, because now I feel like the state of mind that I have here is, I don’t feel pressure. I feel a little bit like I’m used to it.

“Every young person playing, they want to win grand slams and they want to be number one, so of course that’s my goal.

Osaka represents Japan and was born in Tokyo to a Japanese mother and Haitian father but the family moved to New York when she was three before relocating to Florida five years later.

She came to the US Open as a child, and Osaka said: “I always thought if I were to win a grand slam, the first one I’d want to win is the US Open, because I have grown up here and then my grandparents can come and watch. I think it would be really cool.”

Keys, who has now reached at least the semi-finals at three of the last five slams, remembers her 2016 clash with Osaka as the moment she learned to play on the biggest stage in the sport.

The 23-year-old said: “I think that was probably the first time I had been on Ashe and had to learn how to use the crowd. I know now, as a home favourite, to let myself let the crowd in and let them help me.

“There have been a lot of matches now for me at this slam, but that’s definitely still always going to be something that I remember.”

Osaka’s leap forward this year has come under the guidance of Sascha Bajin, who previously worked as a hitting partner for Serena Williams and Caroline Wozniacki.

She has talked about the positive effect Bajin has had on her game and her mindset, and the 33-year-old sees similarities in the games of his current and former charges — if not yet the approach.

Bajin said: “I’m working very hard, and we are all in the team, to make sure that Naomi one day might own the court like Serena. I really, really, really hope she makes it to the final here and I hope that we do, too. That would be beautiful.”

Collin Morikawa leads by two as Rory McIlroy picks up in Florida 11:18
Swimming in the planet’s deepest, darkest waters is where Nuala Moore feels most alive 07:00
Great Escapes: When Daniel Day-Lewis became king of the ring 11:31
Ruben Neves earns Wolves a draw at Newcastle 22:37
Remote congress a hard slog as split season and sin bin make it through 20:19