After winning gold medals this summer, both have to deal with their new-found celebrity 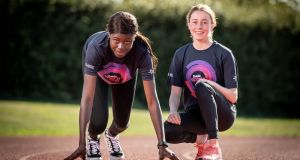 This first week back at school can be tough sometimes. The early morning starts. The suddenly crazy timetable. The pressure of being famous.

Sarah Healy and Rhasidat Adeleke are both tickled by that last one, as any teenage schoolgirl would be, and quickly point out the strictly light side of it – an unexpected extension of their exciting exploits on the track over the summer.

Healy has just started sixth year at Holy Child Killiney, and was already pretty famous for her still-unbeaten run in Irish schools athletics. Only now she’s got two European Under-18 gold medals to her name, in the 1,500m and 3,000m, both won over those magical three days in Gyor, Hungary at the start of July.

Likewise with Adeleke, just started fifth year not far away at Presentation Terenure, who also won gold in Gyor with a brilliant run in the 200m, still aged only 15 (she turned 16 last week). Along with Sophie O’Sullivan’s silver medal in the 800m, they made the papers and the television and, perhaps more importantly, were all over Twitter.

When two more silver medals followed at the World Under-20 Championships in Tampere, Finland – in the women’s 4x100m relay and for Sommer Lecky in the high jump – athletics was suddenly very trendy. Adeleke was also part of that relay team (missing the final due to injury, but still getting a medal), so no wonder she was the cause of some fresh celebrations once the new term began.

“Oh yeah,” she says, “my first day back, they were like ‘oh my God, it is Rhasidat, you’re so famous . . .’ But it’s all funny, they’re just excited. I like it, and it’s good being appreciated for something you like too.”

Healy already knows that sixth year is all about the Leaving Cert, but also appreciated the welcome back encouragement as she looks to extend that unbeaten run all the way to its end.

“Loads of people have been saying ‘well done’ who I thought had no interest in athletics,” she says. “So it’s good they’re interested and hearing about it and want to know more now, but still it’s always surprising whenever it happens.”

Both athletes, as modest as they are, certainly aren’t complaining that their newfound fame has already got them a morning off school; they were present at Irishtown Stadium on Tuesday morning as ambassadors for the inaugural Dublin Sportsfest, a week-long celebration of sport throughout Dublin (from September 23rd-30th) spearheaded by Dublin City Council and Dublin City Sport & Wellbeing Partnership.

Athletes of all ages, however, are already thinking ahead, and for Healy one of the big decisions will be whether or not to take up a US scholarship, the traditional route of young Irish distance runners.

“I haven’t really fully decided, and I do have to start thinking about it now, but I do think I’d prefer to stay in Ireland. I haven’t made any proper decision yet, but there’s the strong study element here, my coach is here, everything is going well, so I don’t feel the need to change anything. And recently lots of athletes have come through from here.”

Healy’s progress to date has been seamless from year to year, all under the careful guidance of her coach Eoghan Marnell at Blackrock AC. She was equally promising at hockey at one stage, playing with Avoca, and will continue to juggle both sports, even though her future is solely on the track.

I’m starting to know as well what Sonia O’Sullivan has done, which is so amazing, and she’s definitely an inspiration now

“I’ll probably play a bit less hockey than last year, but loads of my friends play, and it was so cool to watch the women’s [World Cup] team this summer. But I’m happy doing the athletics for now.”

Still, her entrance into the sport came at a steady pace, and Healy admits she’s still learning about the sport.

“My mum really just wanted me to join the athletics club, with my sister, just for fun. I think I just realised early on that if you train you can do well in this, and I liked doing well in the races. My mum did run a few marathons when she was older, and I think she would have been good.

“But when I was younger I didn’t really watch athletics, so I would just look up to the older girls when I started out. I do watch a lot more now, and I’m starting to know as well what Sonia O’Sullivan has done, which is so amazing, and she’s definitely an inspiration now. But I wasn’t watching when she was doing so well, which is a pity, but I was just a baby.”

Indeed, Healy wasn’t even born when O’Sullivan won her Olympic silver medal in Sydney, and for Adeleke, born in Ireland after her Nigerian parents moved here, athletics also happened by accident more than design.

“I played everything,” she says. “Gaelic football, athletics, swimming, basketball, all at primary school at St Mark’s in Tallaght, and then my teacher there, Miss Luney, she encouraged me to join the club at Tallaght AC, and that’s where I’m coached now by Johnny Fox. But like that I didn’t have any real athletics heroes. I do like Shaunae Miller-Uibo [the Olympic 400m champion from the Bahamas], she’s so good, and physically we’re sort of like the same build.

“And after school we’ll see, it depends really on what course I want to do, and what colleges offer them, but at the moment I would love to stay at home, the facilities here are improving all the time. So we’ll think about it.”

Athletes of all ages have targets and, beyond the obvious one of the Olympics (Tokyo 2020 is a relay possibility for Adeleke), for now it’s about continuing along the same road of improvement.

“This is the not-fun part of the season,” says Healy, “because I feel so unfit, but getting back into it. Next summer there are the European Under-20s, so I’d like to go there and win again, and then there’s the World Under-20s in 2020, but really it’s just about keep qualifying, being competitive, and getting faster.”

And ideally, getting a little more famous too.