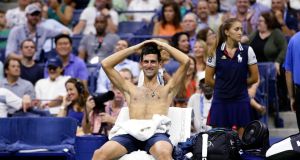 Novak Djokovic during a changeover in his quarterfinal against John Millman in New York. Photograph: AP

It wasn’t to be for John Millman. The Australian certainly performed with the same energy and fighting spirit which was enough to surprise Roger Federer in the previous round and sporadically delighted the pockets of Australian fans here. The world No 55 produced some memorable moments yet Novak Djokovic was not about to fall into the same traps which befell the Swiss.

The Serb, who grew more dangerous as the night wore on, was made for occasions like this. No-one could begrudge this 6-3, 6-4, 6-4 triumph which made it 11 straight semi-finals at the US Open, having missed last year through injury.

The mental strength which has led to 13 Grand Slam titles stood him in excellent stead because this was not a performance of perfection from the 31 year-old who once more had to conquer the conditions as well as his opponent.

The unforced error count rose steadily – it finally read 53 for Djokovic compared to 46 for Millman – and an inability to take his chances punctuated a third major quarter-final of 2018.

The key moment in an entertaining tussle, however, came at the end of the second set. Djokovic had failed to take 10 break points in a row yet when Millman double faulted, the second set was swiftly pocketed in the very next game.

From thereon in Millman, for the first time, was a beaten man. He gave his all until the bitter end, yet it wasn’t enough. The Australian, however, can undoubtedly be proud of his work here, his finest year on the ATP tour coupled with his strongest major performance.

Yet Djokovic is a relentless machine. He just gets the job done. Kei Nishikori, who awaits in the semi-final on Friday after his five-set triumph over Marin Cilic, would have watched events unfold here and will not approach their contest with trepidation, though will be acutely aware that Djokovic can raise his game when the stakes increase.

“I was really tested,” Djokovic said. “Credit to John, he put up a great battle. He’s had an amazing tournament and to come out and fight for three hours he deserves a round of applause.

“We were both struggling and trying to hang in there. There was a lot of sweating but you just need to survive. They weren’t easy conditions but it’s the same for both players.

“He apologised for going to change [CLOTHES]in the second set but I said ‘it’s OK, I need the rest’. John is never going to hand you the win.”

Unfortunately for Millman, the swelteringly humid conditions which were akin to his native Brisbane and helped him see off Federer weren’t replicated entirely for this meeting with the 13-time slam winning Serbian. It was indeed hot, just not unbearable as in previous nights.

Djokovic was ominously on his game from the start – an early break saw him ease 3-0 up and take early control in front of a packed Arthur Ashe Stadium. Millman, perhaps displaying early nerves, finally got on the board but the early evidence suggested it was going to be a tough night. He was being made to do all the running yet was fighting his corner ferociously.

In a marathon game for 4-2 which lasted 16 minutes, Millman saved four break points but it was difficult to make inroads on the Serb’s serve. A break point came and went thanks to the brilliance of Djokovic’s defence before a Millman forehand into the net sealed the opener as the clock ticked towards one hour.

Entertainment flowed at the start of the second, and a lob from Millman on the run was volleyed uncharacteristically into the net by Djokovic. The roar, and delight from the Australian, was something to behold.

Holds of serve were exchanged yet for Millman, making inroads into the twice US Open champion’s serve was essential. Midway through the second set, the 31-year-old had won 67 per cent of points on his first serve and an impressive 75 per cent on his second. There was a solidity in his game which was impossible to ignore.

Millman, however, continued to bring the house down, twice chasing lost causes and forcing the error from his opponent. The 29-year-old was throwing himself into battle with a smile and energetic zest.

There was a time when Millman’s career hung in the balance because of a succession of injury problems. To have recovered and reached this grandest of stages was forcing him to throw everything at such a celebrated opponent.

Millman was inspiring – and perspiring. At 2-2, he asked the chair umpire if he was allowed to head off court for a costume change which was permitted, the USTA announced afterwards, because of “excessive sweating and moisture it was leaving on the court”.

Both players agreed and while Millman exited stage left, Djokovic appeared to plea with his box for some tablets or medications. Having struggled badly with the conditions thus far, it was not a surprise.

Once play resumed, so too did the fight. “Watching Millman is like watching Rocky Balboa on a tennis court,” observed former British No 1 Greg Rusedski. The one-time US Open finalist was correct.

The knock-out blow wasn’t forthcoming though and, as the match moved into the fifth game of the second set, Djokovic had accumulated 32 unforced errors to Millman’s 18. The winners count read 18-13 to the world No 6.

Chances were presenting themselves on both sides of the net – up to this point Djokovic had seen nine break opportunities go begging since penetrating the Millman serve early on. Number 10 presented itself at 4-4 although, once again, he was unable to capitalise. So it was left to Millman to double fault to hand Djokovic the break he’d been searching for.

It was a monumental error from the Australian and as he kicked the ball in frustration, he knew only too well about its ramifications. Gifting breaks of serve to players of Djokovic’s calibre is never a good idea and the second set was swiftly pocketed.

Millman fought on, breaking for 3-3 in the third and then holding. Cue anger from Djokovic at the changeover who was twice called for a time violation on his serve. No-one does incandescent rage like the Serb who had failed to win a point since receiving his first warning.

But once the red mist settled, so too did Djokovic. Millman was broken, as was his resolve. The Australian trudged off court but the applause, from the victor and the crowd, were fully deserved. Djokovic, however, marches on.