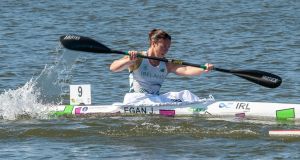 Jenny Egan has an excellent chance of taking a second medal at World Championship level in three weeks this Saturday, September 9th.

The Ireland paddler took bronze in the K1 5,000 metres at the canoe sprint World Championships in Montemor O Velho just two weeks ago, a first for an Ireland paddler.

She has stayed on in Portugal and this weekend she will attempt to medal again at the canoe marathon World Championships at Vila da Prado.

Last year she travelled to South Africa and took a medal at this event.

Her main rival will be Lizzie Broughton from Britain, who took gold at the canoe sprint championships.

The field has opened up as Hungary’s seven-time title champion, Renata Csay, will not compete in the K1, while Lani Belcher, the gold-medallist last year, will also miss out.

Barry Watkins will represent Ireland in the men’s K1, also on Saturday. Egan and Watkins both plan to return to Ireland to compete in the Liffey Descent on Saturday week, September 15th.