Britain’s Kyle Edmund suffers another first round defeat in Melbourne 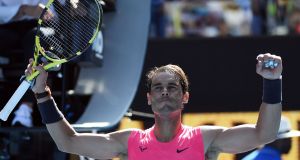 Rafa Nadal hit the ground running at the Australian Open on Tuesday by hammering unseeded Bolivian Hugo Dellien 6-2 6-3 6-0 to reach the second round.

The top seeded Spaniard has never lost to a player ranked as low as world number 72 Dellien at the year’s first Grand Slam and was never in danger on a sunbathed afternoon at Rod Laver Arena.

Bidding for his second title at Melbourne Park, and 20th Grand Slam trophy to match his great rival Roger Federer, Nadal was broken twice by the hard-working Dellien.

But the 33-year-old Mallorcan was virtually flawless in the final set and sealed the match with a crushing forehand winner to set up a second-round clash with either Federico Delbonis or Joao Sousa.

It was tougher than the scoreline appeared, with Dellien — the first Bolivian to play at the tournament — keeping the world number one out on court for more than two hours. But there were no alarms for Nadal, who said: “For me personally it has been a very positive start. What you want is to win in the first round and, if you can do it in straight sets, even better.”

Edmund had been 5-2 ahead when the rain arrived on Monday but lost three games on the resumption and, although he battled well to stay with his in-form opponent in the third set, he could not mount a comeback.

Edmund has now lost in the first round on both his visits to Melbourne Park since making the last four in 2018.