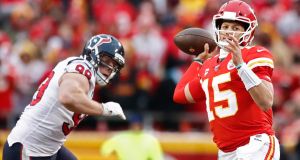 The NFL post-season rolls onward on Sunday, with young talent facing off against veteran experience in the NFC conference championship, and an AFC underdog looking to cement a spot in the Super Bowl.

The AFC championship will see one of the league’s most consistently high-performing teams, the Kansas City Chiefs, take on the post-season’s surprise story, the Tennessee Titans at Arrowhead Stadium (8.05pm Irish time).

With a less-than-exceptional nine-win and seven-loss regular-season record, the Titans still seized on their Wild Card berth, humiliating the New England Patriots’ top-ranked defence and the AFC’s top-seeded Baltimore Ravens on their respective turf.

The team has largely built its offense on its run game, boasting the league’s leading rusher in Derrick Henry, who has completed 377 rushing yards in his two post-season appearances.

Quarterback Ryan Tannehill, a Miami Dolphins castoff who joined the Titans this season, said the team has settled into a strategy of taking calculated risks.

“Derrick’s running hard, so we haven’t thrown the ball a whole lot. Go back earlier in the season and there’s more of the play action and stuff down field,” Tannehill told reporters.

“We’re able to do it different ways and it all kind of depends on how the game’s going and what we’re trying to accomplish.”

They will square off against a vastly different offense with the Chiefs and their stellar quarterback Patrick Mahomes, who boasts the league’s highest passer rating and completed 321 yards passing in their divisional post-season nailbiter against the Houston Texans.

The team handily won the AFC West with a 12-4 regular season record and are favoured by bookmakers despite losing in week 10 against the Titans 35-32, a defeat that sent the Chiefs on a six-game winning streak to end the regular season.

“They got after us. They kicked our tail that day. There’s a point in every season where you go, ‘hey, listen we can pick it up’,” head coach Andy Reid told reporters on Thursday. “That was a point where we probably all took it up a notch and needed to.”

Mahomes is supported by tight end Travis Kelce, who put up a monster performance in the team’s divisional game against the Houston Texans, with 134 receiving yards and three touchdowns.

San Francisco’s defence enters the conference championship on the heels of a dazzling divisional round performance against the Vikings, holding Minnesota to 21 rushing yards and pummelling quarterback Kirk Cousins with six sacks.

Adding to the Niners’ favour was a 37-8 rout over the Packers in Week 12 of the regular season, though head coach Kyle Shanahan said Green Bay’s abysmal performance was no cause for over-confidence.

“They played the same way they played all year. They just had one bad game,” Shanahan told reporters on Wednesday. “They have been a tough team offensively and defensively all year and done a good job not turning it over and their defence has kept people from scoring.”

The Packers bounced back from the loss to win the final five games of the regular season, before defeating the Seattle Seahawks 28-23 at home to reach the NFC title game.

Green Bay’s top receiver Davante Adams, who caught eight passes for 160 yards against Seattle, acknowledged the pressure he was under as one of Rodgers’ top targets.

“I just try to put the onus on me to go out there, get open, give him a nice place to go with the ball,” Adams told reporters.