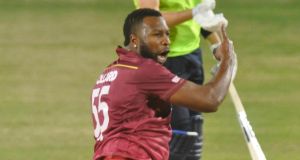 A 91 from Lendl Simmons helped the West Indies beat Ireland by nine wickets to draw their Twenty20 series 1-1.

Kevin O’Brien and Paul Stirling were put in to bat at Basseterre, the former hitting five consecutive fours in the third over as the tourists reached 50 inside 3.2 overs.

But O’Brien’s innings came to an end two balls later when he holed out off Kieron Pollard for 36 from 18 balls.

Stirling fell shortly afterwards for 11 with Dwayne Bravo and Pollard both getting three wickets apiece as the tourists fell from 74 for 2 to 138 all out inside 19.1 overs.

Windies openers Simmons and Evin Lewis kept the scoreboard ticking over and reached 123 without loss at the half-way point, needing 16 runs from their remaining 60 balls.

Lewis (46) looked to seal the game with a six but his top edge found wicketkeeper Gary Wilson, leaving Simmons to score the winning runs with his tenth maximum of the innings.

After the defeat, Ireland captain Andrew Balbirnine said: “We were outclassed in all facets today - we started very well, as we have in most the games, but when you lose wickets you lose momentum. We had a few soft dismissals, which is hugely disappointing, because we came into this match firing and we simply didn’t put in a performance today. But to draw a series against the West Indies, we can take positives from that.

“We’ve had a lot of young guys come out and play their first series against a big nation - like Harry Tector, Gareth Delany - so it’s great to give them that exposure. Obviously in T20 all of our cricket is leading up to that World T20 and getting out of that Group Stage. Look, the guys are hurting but they’ll learn from it, so that is all you can ask.”