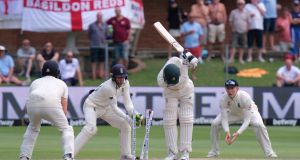 The victory was so easy, despite a cheerful, preposterous last wicket partnership of 99, that it becomes hard to assess. At Cape Town England had to graft, dig deep and snatch every chance to win. Here they dropped half a dozen chances, with Ben Stokes the unlikely yet most regular culprit – though he does stick himself wherever he thinks the ball will go – and still they won by an innings and 53 runs.

The mopping-up operation on a breezy day was clumsy but not too stressful, partly because the sun deigned to make an appearance again. Joe Root opened with Stuart Broad, who for the second morning in a row dismissed Vernon Philander in his first over, with Ollie Pope taking his sixth catch of the match. Root himself decided to partner Stuart Broad at the start, which made sense given his success on Sunday, though it was surprising and ultimately embarrassing that he should bowl unchanged for 80 minutes without success. His last over yielded 28 runs (including four byes); it also removed the smile from Root’s face and equalled the most expensive one delivered in Test cricket.

Kasigo Rabada was caught at mid-on driving at Mark Wood’s first delivery and soon Anrich Nortje became the first victim for Dom Bess in this innings. Then Keshav Maharaj made merry, especially against Root, who decided that two off-spinners should take the new ball. Along with Dane Paterson, who lived up to his reputation as a tail-end swinger, the last pair enjoyed themselves with Maharaj striking the ball with ever increasing majesty. It was an ugly end for England and might have cheered the South African camp up a little bit. In the end England needed a direct hit by Sam Curran at mid-on to run out Maharaj for a spirited 71.But the plain fact remained: South Africa had been thrashed.

Despite that last wicket-partnership, which the Australians would never have permitted, the plusses are unusually plentiful after this game. Habemus papam by the name of Ollie, who can not only bat; he can also catch at short leg (as well as keep wicket in an emergency). He looks very comfortable out there, as do most of the youngsters, who bring a freshness to England’s outcricket that can help to rejuvenate the old lags. There will be days when that freshness gives way to naivety, but for the moment that is a good bargain.

Bess may have been chastened in the second innings when he was overshadowed by Root on Sunday, which meant that he was consigned to watching the captain bowl “his” overs. Perhaps he was a bit impatient second time around, though against the current batch of South African batsmen he could remain miserly. There was relief visible when a quicker ball dispatched Nortje on Monday. But his first innings five-wicket haul was another landmark – like Pope’s century.

Bess is not mysterious but he is increasingly competent. He is also eager to learn, yet bright enough not to follow slavishly every piece of advice offered; instead he sifts what he thinks will help. And he is up for any challenge. In one area he surpasses Moeen Ali. Whenever Moeen beats the bat with a lovely, turning delivery he gives the impression that this must have been an accident rather than a consequence of his special skill. By contrast Bess can bowl an innocuous straight ball and if it doesn’t meet the middle of the middle of the bat up go the arms to his head; he has a little stare to suggest that the batsman was really quite fortunate to survive his latest, fizzing off-break. He is a more optimistic bowler than Moeen.

Then there is Root, the off-spinner. On Sunday he exploited the conditions better that Bess partly because he has learnt to propel the ball at pace usually from around the wicket and here it gripped and spun more than Bess could manage. In certain circumstances this can be invaluable – the tour to Sri Lanka springs to mind. This should not mean, however, that Root should undertake to bowl many of those tough first innings overs on a non-turning track. That is a job for the specialists. He has enough to do already. But when the ball is turning he presents possibilities. This advance and Bess’s success changes the dynamic a little for the tour of Sri Lanka although there is little doubt that Moeen would be in the best squad – if available.

Wood’s efforts were impressive and very encouraging; they also challenged the received wisdom. He had not bowled in a red-ball game for 11 months yet his preparations were so precise and conscientious that he could be parachuted into a Test match and still bowl with rhythm, control and, crucially, pace. Perhaps he really can be a wildcard in two or three Tests in a five-match series.

All this optimism has to be tempered by the nature of South Africa’s performance. From the second day onwards they were pretty awful. The loss of Rabada for the last Test, which was announced on the second morning, was a blow in the solar plexus for the team and the management for whom this decision creates all sorts of complications.

Graeme Smith, the interim cricket director, opted to appoint coaches from his old team, Mark Boucher and Jacques Kallis, because they might bring order, inspiration and, just possibly, instant success. The victory in Centurion seemed to give him leeway in terms of selection and policy but after two defeats, the second of which bordered on a humiliation, despite those late blows from Maharaj, that room for manoeuvre is fast disappearing. A drawn series after a South African victory at the Wanderers in Johannesburg might ease the situation but somehow this now seems most unlikely. - Guardian