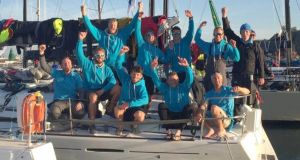 Royal Ocean Racing Club (RORC) Commodore Michael Boyd is keeping an eye on the leaderboard after his First 44.7 Lisa crossed the finish line inside the top 10 of the Fastnet Race on Thursday.

Class leaders in the 368-boat fleet are firming up as finishers streamed across the Plymouth finish line after 604-miles of racing and five days at sea.

With this, the leaders in the bigger classes too have begun firming up along with the prospects for the boat that will be crowned overall winner under IRC rating in the RORC’s biennial flagship offshore race.

In Class Two, Nick and Suzi Jones’ First 44.7 Lisa, skippered by Dubliner Boyd, finished 36 minutes after Pintia, (Gilles Fournier and Corinne Migraine) correcting out into second place, one hour 13 minutes behind the French boat on corrected time. It will most likely be the top Irish result from the 12 entries competing.

Boyd acknowledged that Pintia had stolen a march on them at Portland Bill. “We failed to get to there in time. Pintia went in and we probably should have followed her and they just managed to get through the gap. We went outside and lost quite a few miles but we gained them back at Lyme Bay,” said the Royal Irish Yacht Club sailor.

But it wasn’t all plain sailing, however, in this year’s record-breaking fleet drawn from 29 countries. Baltimore lifeboat coxswain Kieran Cotter has described the rescue of 13 Fastnet sailors off the West Cork coast early on Thursday morning.

One yacht lost its rigging some 26 miles south east of Baltimore. The crew also informed the lifeboat team that their fuel had been contaminated, and they were running on a small container of spare fuel, which they estimated would only give them an hour’s motoring time.

Also on the south coast, Paul O’Higgins’ ‘Rockabill VI’, the winner of June’s Dun Laoghaire to Dingle offshore race, is dominating this week’s Class One racing at Calves Week in West Cork. The week’s own traditional Fastnet Rock fixture highlight was postponed on Thursday until Friday due to light winds.

Although leading at one stage by more than six miles, Irish solo sailor Tom Dolan had to be satisfied with fourth this week at les Sables d’Olonne at the end of Stage two of the Transgascogne 2107.

The County Meath sailor is building up to October’s Mini-Transat Race. Dolan, will share some of this week’s experience and the challenges he has overcome at a sailing supper in the National Yacht Club next Thursday evening.

Skerries Sailing Club is hosting the 2017 Dublin Bay Mermaid National Championship for what is the class’s 85th anniversary year. With 26 entries the week has so far seen a range of conditions. With only two points between them, Sam Shiels (17 points) and Jonathan O’Rourke (19 points) are currently battling it out to win the coveted title by Saturday.

Cork Harbour’s National 18 class will host a testimonial race at the Royal Cork Yacht Club on Saturday, 9th September in recognition of veteran campaigner Dom Long’s 35 years of service to the dinghy class.

With the ultimate aim to maximise the number of boats racing each week, the 28-boat Dublin Bay Flying Fifteen class has launched a search for competent crew to help get more boats out on the water. The bay’s biggest one design has established an online crew register so that sailors can sign up with details of their skills and experience.

Corofin combine total football with dark arts for three-in-a-row 20:03
Salah seals the deal as Liverpool see off a dogged Man United 18:39
Connacht huff and puff but Montpellier pull away at the end 18:36
Hockey: Ireland strike late on to claim bronze 17:55
Champions Cup: Leinster meet Saracens and Ulster face Toulouse in quarter-finals 17:13
Here is your handy guide to sport on television this week