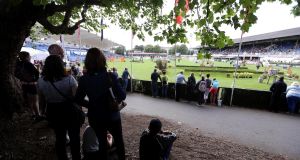 The home-bred Assagart Lord Lancer is a grey gelding by the Oldenburg stallion Castleforbes Lord Lancer out of the Big Sink Hope mare My Only Hope. The reserve champion was Tiernan Gill’s Barnaby Flight filly Flogas Liqueur.

Northern exhibitors Pat Martin and Dorothy Walsh took the two-year-old title with their well-fancied Emperor Augustus gelding Superior Choice who, earlier in the season, was supreme hunter champion at the Royal Highland Show outside Edinburgh.

Categorised under showing, the final phase of the small and young event horse classes took place on Thursday morning in the Main Arena.

It was a case of third time lucky for Birdhill owner/breeder/rider Aideen Kirbey in the small event horse class as she won on the seven-year-old Lancelot mare Derg Masterpiece.

Brookfield Cavalier Cruise, a brown Cavalier Carnival gelding ridden by Patrick Whelan for English owners John and Chloe Perry and Alison Swinburn, lived up to his billing as one of the pre-show favourites when winning the Horse Sport Ireland four-year-old class of the young event horse section.

In the five-year-old class, Nicola Ennis sprang something of a surprise when winning on Jody Madden’s home-bred Golden Major Magic mare Flemington Ruby.