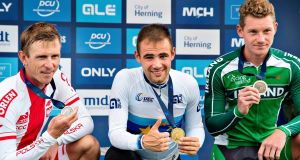 Irish professional Ryan Mullen went agonizingly close to gold in the Elite time trial at the European Championships in Herning, Denmark on Thursday, finishing just five seconds behind the winner.

Winner Victor Campenaerts covered the 46 kilometre course in 53 minutes 12 seconds. Mullen had been quickest at the early time checks, but the Belgian put in a strong finishing segement and snatched victory.

Also finishing strong was the Pole Maciej Bodnar, who was two seconds behind Campenaerts and took silver.

Mullen was a further two seconds back, netting bronze. Although this was the best Irish men’s result at Elite level in several decades, he was disappointed.

“That was the best day I could have asked for – I had really good legs, and I was on it. I’m gutted that I was five seconds off the gold medal. That’s what I wanted – I didn’t come here hoping to be third,” he said.

“I had high hopes because I knew I did a good ride, and knew that it would take a big beating. That’s my first elite podium at a major championship so that’s progress, and a step up from before. I came third to the silver medallist from last year’s championships, and Bodnar, who won the TT stage in the Tour de France. ”

Mullen is the Irish road race and time trial champion and is a member of the Cannondale-Drapac WorldTour team. Three years ago he was the silver medallist in the World U-23 championships, highlighting his talent against the clock. He’s still just 22 years of age and has time on his side, but his ambition means he wants to win big races now.

Also performing strongly was Team Wiggins rider Michael O’Loughlin, who was 11th in the under-23 men’s time trial. He was just 0.3 seconds off the rider ahead of him.

“I’m a bit disappointed to be just outside the top ten,” he said. “You always look back and wish that you went around corners a bit quicker. But you can’t go back. At the end of the day it was a pretty solid ride. It was wet and windy, so that played a factor, but it was the same for everyone. The course was pan flat so you were constantly pushing on the pedals.”

Next up are the road races, with the junior men competing on Friday. The championships run until Sunday.