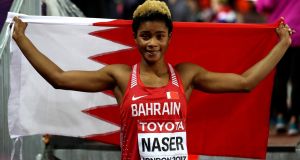 Not everything about the World Athletics Championships is measured on the medal table. Although coming into day seven some of the changing patterns are getting conspicuous, especially for a country like Bahrain.

With one gold and one silver medal already won, Bahrain is now ahead of some traditional superpowers, including hosts Britain, who still boast only one more medal than Ireland.

Neither of Bahrain’s medallists was actually born there: women’s marathon winner Rose Chelimo was, as her name suggests, born and raised in Kenya; Salwa Eid Naser, who won silver in the 400m on Wednesday night, was born in Nigeria.

Earlier this year the IAAF froze its rule on athletes switching allegiance, such was the increasing level of abuse – several Kenyan women running for Turkey despite never living there. That doesn’t impact on existing transfers but the complications with the issue are well illustrated with Chelimo and Naser.

Because Naser, who at age 19 is the youngest ever medal winner in the women’s 400m, can claim strong and genuine ties to Bahrain; her father was born there, and she’s largely come up through that country’s system, at age 16 winning a 200m/400m double at the Arab Junior Championships in Cairo

Her medal was won in considerable style too, coming from behind to beat now 14-time World Championship medallist Allyson Felix into third, as her American team -mate Phyllis Francis won gold. Still, only two Bahraini women had previously medalled at these championships, and they’ve already equalled that number in London.

Across the board, 33 nations have already won medals coming into day seven, 17 of which have won gold, again many of these being the non-superpowers such as Norway, Venezuela and Lithuania. That is helped by the continually justified absence of a certain Russian Athletics Federation. (Anyone seen Icarus yet?)

Ireland, meanwhile, may someday reflect those patterns too in the entirely legitimate sense, as emerging young sprinters Gina Akpe-Moses, Patience Jumbo-Gula and Rhasidat Adeleke, each of whom have African backgrounds but came up through the Irish system, make their rise towards the senior stage.