Former world number one reaches quarters of Citi Open after 3.0am finish in Washington 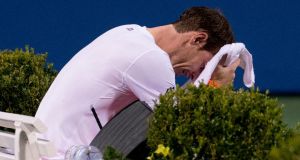 An emptional Andy Murray after his victory over Marius Copil in Washington. Photograph: Andrew Harnik/AP

Andy Murray hit out at the scheduling of his third-round match at the Citi Open in Washington after finishing off a three-set victory over Marius Copil at 3.01am.

Murray is playing just his third tournament since hip surgery in January and must now try to recover for a quarter-final against Alex De Minaur later on Friday.

The Scot even suggested he may pull out rather than risk putting his body through such an ordeal so soon in his comeback after taking three hours and two minutes to defeat Romanian Copil 6-7 (5) 6-3 7-6 (4).

Murray told reporters at the tournament: “I don’t think it’s reasonable and I’m disappointed in that. I know that the weather’s tricky for the scheduling. But it’s a very difficult position to be in when you’re coming back from such a long lay-off.

It was the latest finish in the 50-year history of the tournament, which this year has been blighted by rain.

After shaking hands with Copil and acknowledging the understandably sparse crowd, Murray sat down in his chair and sobbed repeatedly into his towel.

“Just the emotions coming at the end of an extremely long day and a long match,” he said.

Murray looked set to win the opening set against Copil, ranked 93, after moving 5-0 ahead in the tie-break only for the Romanian to reel off seven points in a row.

The 31-year-old levelled the contest and looked the stronger in the decider but Copil pushed him all the way to a deciding tie-break.

It was a third successive three-set match at the tournament for Murray, who defeated American Mackenzie McDonald in the opening round and compatriot Kyle Edmund in his second match on Wednesday.

Leona Maguire left playing waiting game 21:52
Barcelona and Bayern battle for right to take on nouveau riche 20:44
Caldwell makes himself at home at Celtic Manor 20:32
Anderson swings back into form against Pakistan 19:52
Selby strikes back against O’Sullivan 18:44
Here is your handy guide to sport on television this week