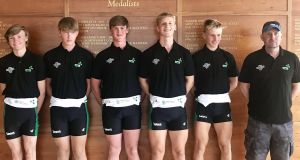 The Ireland men’s junior coxed four which qualified directly for their semi-final at the World Junior Championships in Racice in the Czech Republic, with their coach Fran Keane. (L-R) Eoin Finnegan, Conor Mulready, James O’Donovan, Fintan O’Driscoll and Eoin Gaffney.

It was a day of heats and serious heat for the Ireland team at the World Junior Championships on Thursday. Three of the four crews face into repechages on Friday at Racice in the Czech Republic.

The Ireland junior men’s coxed four made it through to their semi-final first time out. The first three crews would go to the semi-finals without need for a repechage. Ireland led through the 1,000 metre mark, but came under pressure from Canada, who took over in the lead. Russia and Croatia were also pushing hard for the key spots. Ireland held on well to take second behind Canada. Russia took third.

The three other Ireland crews will be in action again in the hope of making the semi-finals - hoping that the heat will abate. On Thursday, morning temperatures climbed through the 20s and the schedule was brought forward by 30 minutes and races run at five-minute intervals because of the forecast of very high temperatures in the middle of the day.

In the women’s junior pair, Gill McGirr and Eliza O’Reilly took fourth in their heat. The United States won - by an extraordinary margin - from Canada, while Britain came through in their own battle for third with Ireland.

The junior men’s quadruple also took fourth, in a race in which Switzerland, New Zealand and Italy fought it out for two places, with Italy missing out and taking third.

The junior women’s double of Ciara Moynihan and Ciara Browne took fifth in their heat.