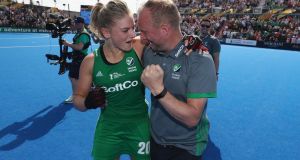 Irish coach Graham Shaw hopes his side’s progression to the final of the Women’s Hockey World Cup in London can cause a shift in hockey in Ireland.

The Irish coach, speaking after Ireland beat Spain following a penalty shootout to earn an historic place against the Netherlands in the final, said defeating the top teams in the world in such an heightened environment could be a seminal moment in hockey.

“Hopefully it a changing moment in these girls lives because they deserve it.

“We see people in our sport who are iconic in their country for what they have done. These girls now are absolute legends in my book.

“ What an achievement! To come in as the second lowest ranked team and to make a World Cup final is just an absolute dream come true.”

McFerran, the young American university student based in Louisville, was pivotal to Ireland winning their penalty shootout against India in the quarter-final and again against Spain in the semi-final, marking her out as one of the best in the world.

Pinder stepped up to take two penalties, not having taken any in the quarterfinal game against India.

“Serious guts, serious bottle to take it when you haven’t taken one in the quarter-final and then to do it again,” said Shaw of the Pembroke Wanderers player.

“She’s so laid back so maybe she is the right person to take a one-on-one. I actually thought she had missed and didn’t know what everyone was cheering for! It’s a very difficult thing to do, stand up in a World Cup semi-final, the first time ever in front of that crowd like that in this tournament. It’s our first major. To have that much coolness in your play is incredible.

“I have to tip my hat off to the Spanish fifth one,” added Shaw of the audacious lob from Lola Riera. “That’s serious, to lob a keeper in a semi-final. I had to applaud that.”

McFerran too was outstanding in keeping the quick firing Spaniards at bay for all but two of their six penalties.

“She’s like twinkle-toes in there. Her feet move so quick; she’s not the biggest keeper in the world but she is incredibly athletic,” said the Irish coach.

“If you saw her sprint, you would think she is a sprinter. She is lightning off the mark. It probably plays into the Spanish heads when they got near her.

Mc Ferran could be in line to win the goalkeeper of the tournament award.

“If someone doesn’t pick her, they will have to come talk to me,” said Shaw.

“What a job she has done? Conceded just three in the tournaments, won two shoot-outs. It’s not a surprise to us.

“I watched her at underage as an 18-year-old and you could tell she had this steel about her, the athleticism. I have to pay credit to Nigel Henderson. What a goalkeeping coach, not just with Ayeisha and other ‘keepers in Ireland.

“We are incredibly lucky to have that man coaching our goalkeepers. He trains them not only to be a top goalkeeper but also to be mentally strong and composed in different situations.”