Ian O'Riordan at the Berlin Olympiastadion 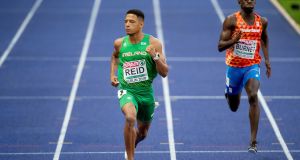 Ireland’s Leon Reid on his way to finishing second in the men’s 200m final at the European Athletics Championships. Photo: Morgan Treacy/Inpho

Achtung Leon Reid. Just five days after being cleared for take-off and claiming that first green vest felt like a “super suit” he’s already announced himself as the future of Irish men’s sprinting.

By running into the final of the 200 metres Reid has also given himself the chance to go where no Irish male sprinter has gone before: step onto the medal podium of the European Championships.

That chance comes here on Thursday night (8.05pm Irish time), and given his not ideal preparations that’s good enough for now. Reid was nearly three years in limbo awaiting a transfer of allegiance from Great Britain, where he has already won sprint medals at both junior and under-23 level.

Only last Friday did the IAAF clear his name, having put a freeze on all such transfers for over a year. Despite that long wait and any extra pressure to deliver Reid performed like an athlete in complete control.

“I don’t let that sort of stuff get to me,” said Reid, who still lives and trains in Bath, where his adopted mother Claire Russell, from Wexford, also now works.

“I know the few people that are counting on me, that’s who I deliver for. I don’t deliver for the idiots sitting beyond screens, tweeting about me. I worry about my mum, my coach, my Irish family, that’s all who matters to me, not these people I don’t even know.

Running bold and brave in equal measure, Reid came into the stretch on the heels of reigning World champion Ramil Guliyev in the lane outside, and chased him all the way to line – nailing second in 20.38 seconds, the third fastest of his career.

Guliyev clocked 20.33 and the other semi-finals were marginally quicker, which handed Reid lane eight for Thursday evening’s final – same as Thomas Barr in his 400m hurdle final, set for 7.15pm, incidentally.

Just turned 24, Reid’s medal credentials also include a bronze won for Northern Ireland over 200m back in April. Clearly getting into that final was the least of his ambitions.

“Definitely, just hold my form, came through strong in the end. The time isn’t important, in the semi-final, it just means I can execute again and go faster in the final. It was all about control, saving some energy for tomorrow, and just going again.”

Reid’s late mother was from Belfast, and after winning a national sprint double last month, and despite the late clearance, Reid was always determined to make his debut an Irish vest in some style – and so it proved.

“It’s like being in a super suit,” he said. “It affected me more at the National championships, because once I got here I settled. It’s a dream true. My (adopted) mum is here, and her boyfriend in here, cheering me around. So all good. I have 10 close friends flying out for the final, my coach is here as well, James Hillier.”

Just turned 24 he runs with an air confidence too, clearly not put off by Guliyev’s presence: “I didn’t really care, he’s just another guy. You don’t let it affect you, I’ve done it a million times. It’s just another day. And as you saw I could have taken him, but we go again tomorrow, so let’s see what we can do. I’ll still just go out and execute my own race, I’ll be final.”

And his medal chances – even out in lane eight?

“There could be, we’ll see tomorrow. I’m not going to say I’m going run this or that or get medals or anything, whatever comes will come. It was the same at the Commonwealth Games, go in with no expectations, and what comes will come. You saw Thomas Barr yesterday, chill as chips before his race, and he delivered again, that’s two in finals tomorrow night now.”

And after 84 years of trying maybe a first Irish men’s sprinter on the podium: “Well, 28 years since anyone won a sprint medal for Northern Ireland at the Commonwealth Games, so records are there to be broken. Let’s see what we can do.”

No such joy for Marcus Lawler. Most athletes will tell you that times count for nothing in championship running, and Lawler was reminded of that the hard way when exiting 200 metres heat – neither the clock nor the position on his side.

No excuses either: Lawler had lowered his best to 20.40 seconds in the weeks before Berlin, but only managed 20.80 here, finishing fifth.

“That’s just not good enough, there’s no other way to put it,” admitted Lawler. “I had a target of making the final and that wasn’t good enough. I don’t know what went wrong. I ran my own race the whole way through. But it just wasn’t there. Ranked number one on paper, it that heat, and I can’t pinpoint what went wrong. It’s been such a good season, and that’s why it’s so devastating.”

Winning a first ever European track gold for Israel in the women’s 10,000m in 31:43.29 was former Kenyan Lonah Salpeter, who moved to Israel 10 years ago as the nanny to the Kenyan ambassador to Israel; Ireland’s Emma Mitchell was 19th in 34:08.61.

Irish in action on Thursday in Berlin (all times Irish)

1 James Ryan set for up to 12 weeks on the sidelines
2 Ken Early: Frank Lampard’s problems start at number one
3 The Offload: Schools rugby talk in the Seanad appears tone deaf
4 All in the Game: Klopp gets the last laugh in quiz show
5 Rory McIlroy admits missing the crowds as he looks to end Major drought
Real news has value SUBSCRIBE

James Ryan set for up to 12 weeks on the sidelines 15:07
Sligo v Waterford postponed due to player’s Covid-19 symptoms 11:34
Ronnie O’Sullivan records fastest win in Crucible history 12:05
Justin Thomas takes world No1 with victory in Memphis 09:06
The Offload: Schools rugby talk in the Seanad appears tone deaf 09:00
Here is your handy guide to sport on television this week