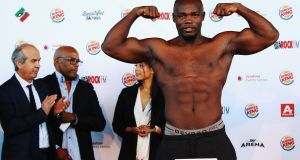 Anthony Joshua has less than two weeks to adjust to a new opponent after Carlos Takam replaced Kubrat Pulev as the world heavyweight champion’s challenger on October 28th.

Bulgarian Pulev, who had been the mandatory challenger to the IBF and WBA champion, has been forced to pull out of the fight after hurting his shoulder while sparring.

Frenchman Takam, 36, will replace him, meaning Pulev faces a lengthy wait to fight Joshua after also losing his status as mandatory challenger with the IBF.

“I received a call from (Pulev’s promoter) Kalle Sauerland late (on Monday) afternoon to inform me that Pulev had injured his shoulder and was maybe ruled out of the fight,” said Joshua’s promoter Eddie Hearn of Matchroom via a statement.

“This was later confirmed by his doctor. IBF rules state that the mandatory will go to the next fighter in line which is Carlos Takam.

“When the Pulev fight was announced I made a deal with Takam’s team to begin camp and be on stand-by for this fight. When I called them this evening they were overjoyed and good to go.

“It’s a difficult position for ‘AJ’ having prepared meticulously for the style and height of Pulev, he now faces a completely different style and challenge in Takam. This hasn’t happened in his career before but he is ready for all comers on October 28th.”

It was reported in Bulgaria that Pulev, also 36, could yet challenge Joshua in November or December, but Matchroom have already sold more than 70,000 tickets and anticipate a near-80,000 crowd to attend the fight at Cardiff’s Principality Stadium.

The venue is also committed to hosting the Wales rugby union team’s autumn internationals on consecutive Saturdays from November 11th to December 2nd.

Takam, born in Cameroon and considered a less challenging opponent for Joshua having previously lost to WBO champion Joseph Parker, Russia’s Alexander Povetkin and the little-known Gregory Tony, is shorter yet rangier than Pulev.

His intervention comes at a time when rumours persisted that Joshua’s long-time rival Dillian Whyte, scheduled to fight Robert Helenius on the undercard, could instead have fought the 28-year-old in a rematch.

Both Joshua and Matchroom intend for him to fight higher-profile opponents in 2018, when WBC champion Deontay Wilder, Parker, and David Haye — should he win his rematch with Tony Bellew in December — will be among their targets.

Any second opportunity for Pulev, whose only defeat came against Wladimir Klitschko in 2014, will therefore be significantly delayed.