Magnus Carlsen: global star of chess to press on after latest title

Norwegian: ‘If I had lost, it could have been my last world championship match’ 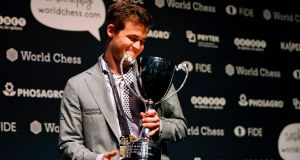 As Magnus Carlsen sat in his dressing room, euphoric and chatty after finally suppressing the stubborn resistance of Fabiano Caruana to retain his world chess title, he made a stark confession. “If I had lost, it could very well have been my last world championship match.”

The words came as a thunderous bolt from the blue and they are bound to send tremors through the chess world. After all, Carlsen has been the world number one since 2010 and would have been a warm favourite to regain his title in 2020 if he had lost. Yet, for the first time, here he was acknowledging that he would have contemplated turning his back on the biggest prize in his sport at the age of 27.

The brilliant Norwegian, who retained his title with a thumping 3-0 rapid-play victory over Caruana on Wednesday after all 12 classical games were drawn, was just as frank when asked whether he could ever again scale the heights of his peak Fide rating of 2,882, the highest in history, which he obtained in his early twenties.

“It is going to be very difficult,” says Carlsen, whose ranking now stands at 2,835, three ahead of his American rival. “It is a lot about the mindset. There is no pure chess reason in terms of understanding the game that I should play worse than I have before. But these games show that I have not been able to take all my chances. I need to work on that to be even sharper the next time.”

At least there will be a next time. Before the match Carlsen’s frustrations with his performances had led his sister Ellen to hint that Carlsen might retire if he was defeated. When asked whether such a course of action was really on his mind, he replies: “For sure,” before clarifying his position. “If I had lost, it could very well have been my last world championship match.”

When pressed why, Carlsen replies: “I don’t know. I wouldn’t have retired from chess but I might not have played another world championship match. But now we’ll see. I have a lot of time over the next two years to improve my game.”

The sport certainly needs him to stick around. For these days the Norwegian is a bona fide celebrity, guest-starring on The Simpsons, modelling for G-Star Raw and making $8m (£6.25m) a year according to Forbes magazine. Such is Carlsen’s popularity in Norway that his matches were shown live on NRK, the equivalent of RTÉ One, with Wednesday’s tie–breaks breaking all previous records for Carlsen’s games. Three million of the country’s five million population watched at least some part of the match.

The Magnus effect has extended to participation levels in his country, with the Norwegian Chess Federation confirming that close to half a million play regularly online. Interest in the match also spread far beyond Norway with the website Chess.com saying that millions had watched its live coverage over the 20 days.

It surely helped that there was plenty of intrigue off the board too. Early in the match, images of Caruana’s preparation leaked online, leaving many to speculate whether this was a huge blunder or a cunning ruse to throw his opponent off the scent – while Carlsen arrived for game 9 with a black eye after smashing into a Norwegian journalist while playing football on a rest day.

The contest finally ended on Wednesday after more than 50 hours of play over 15 games, but it might have been a much shorter story if Carlsen had converted a vastly superior position in the first game. However, he was unable to navigate his way through the battle fog and the match quickly descended into the chess equivalent of trench warfare, with all 12 games of classical chess drawn.

Some feared that Carlsen’s near-legendary desire to win every game had turned into an altogether more human desire not to lose – especially when he offered a draw in a better position in game 12. Vladimir Kramnik, the world champion from 2000-2008, even suggested “this is not the Magnus we have come to know”, while Garry Kasparov, who held the title from 1985-2000, wondered whether Carlsen was losing his nerve.

It turned out he was merely playing possum. In the rapid-play tie-breaks – where both players had 25 minutes to make all their moves – Carlsen was much more like his old self: his play turbo-charged and confident, his tenacity irresistible. “I always knew if it went to a tie-break I would have good chances,” he says.

“On Tuesday, I just tried to relax, I played some football and got a good night’s sleep and when I woke up I felt very good. I knew from early on in game 1 that I had good chances. It was just a very good day.”

Carlsen later celebrated his victory in the modest surroundings of Wetherspoons in Holborn, where he happily posed for pictures with fans. It was a welcome release after months of preparation that had involved hours of daily study along with regular football and basketball sessions, 30-60 minute runs, hot yoga and a largely vegetarian diet to get him into the best possible shape for the physical and psychological stresses of a world-title match.

But not all had gone to plan and when asked whether he was looking forward to not bashing his head against Caruana’s ultra-solid Petroff defence, he laughs. “Yeah, for sure,” he says. “That is one of the things I need to improve on. My white openings in this match weren’t great and I barely got any playable positions. Fortunately, I played well with black to counter that.

“The match shows Fabiano is at pretty much the same level as I am in classical chess right now. Huge credit to him, but that is not something I was completely satisfied with.”

The result leaves Carlsen as the king of the chess world for at least another two years, given he is not due to face his next challenger until 2020. But the future of the championship itself is more of a dangling question. For many it remains the original E-Sport and the fact that such huge online audiences followed a game that emphasises the merits of thinking fast and slow, shows its potential. However, some players, such as the strong Dutch grandmaster Anish Giri, believe that so many draws in such a high-profile match could scare sponsors away.

Carlsen believes that the world championship format needs to be spiced up, either with a longer format or more rapid games. “In general it’s good to incorporate more rapid and blitz in the world championship because to some extent it is a purer form of chess because preparation plays less of a role,” he says. “Instead, it is more about quick calculation, intuition and instinct, all of the things I think are important in chess. So I would like that – and also more games in the match to give more room for experiments and taking chances.”

Whatever happens next Carlsen will fancy his chances. His powers may not be quite as supreme as they once were but he remains the man to beat and as he reminded his rivals yet again across three captivating weeks in London if you come for the king you best not miss.