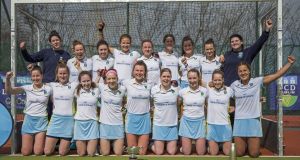 After completing the first phase of their women’s Hockey League campaigns last weekend before the winter break, the top 10 sides in the country turn their attention to the second round of the Irish Senior Cup on Saturday.

UCD are starting their quest for the first three-in-a-row in the competition since Pembroke Wanderers achieved the feat in 1949, Lurgan their opponents at Belfield. The Ulster side gave the students a scare at the quarter-final stage last season when they took the lead before the students ran out 3-1 winners, and they travel to Dublin in good form, sitting top of the Ulster Premier League with six wins out of seven.

Pegasus, who were beaten 4-0 in last year’s final by UCD, take on Trinity at Queens in the second of four Ulster v Leinster ties, the others pairing Railway Union and Ulster Elks with Ballymoney hosting Loreto.

There are two all Hockey League ties, Belfast Harlequins looking for a repeat of their 3-1 victory earlier this month when they meet Ards again, while Old Alexandra take on Muckross, who they beat 5-1 back in October.

Pembroke Wanderers, meanwhile, host a Monkstown side whose confidence should be high after their start to their Hockey League Division Two campaign, three wins out of four putting them top of Pool B.

And Munster’s only remaining representatives in the competition should be confident of progressing, Cork Harlequins at home to Banbridge, who have been struggling in the Ulster Premier League, winning just one of their six games to date.

Wimbledon 2020 cancellation remains likely 12:38
Reality Bites - Tales of the new normal: Andrew Coscoran 11:41
Marcus Rashford fighting to keep free meals on the menu for children 10:56
Shane Lowry: Global nature of golf could cause issues when game returns 10:45
All in the Game: Belarus plough ahead despite global pandemic 10:00
Here is your handy guide to sport on television this week