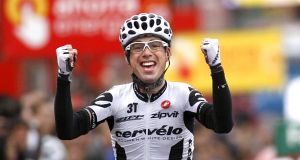 Philip Deignan celebrates his stage victory in the 2009 Vuelta a España. Photograph: Inpho/Getty

Nine years after he took a superb stage win at the Vuelta a España en route to ninth overall, Philip Deignan has announced his retirement from professional cycling. The Letterkenny rider confirmed the end of his career via Twitter on Tuesday, saying that he has mixed feelings but also that he is looking forward to what comes next.

“With a combination of sadness but also a huge sense of pride and optimism I would like to announce my retirement from professional cycling,” he said.

“As a 15-year-old riding around Donegal I never dreamt that I would go on to make the sport I love my job for 14 years. I appreciate all the opportunities that have come my way and to so many people who have helped me during my career, thank you.”

Deignan repeatedly exhibited strong climbing skills in the sport, with his successes including that Vuelta performance, overall victory in the 2013 Tour of the Gila and runner up slots on stages of the 2011 Tour of Beijing and the 2014 Tour de Suisse. He was one of the most talented Irish riders of the past two decades.

However he likely would have achieved more success had he sought a leadership position in the sport; instead, he moved to Team Sky prior to the start of the 2014 season and remained in a helper role there ever since. He aided riders such as Chris Froome, but never got a start in the Tour de France.

Had he been with another squad, he likely would have ridden that event at least once, and would also have got more personal opportunities.

Still, racing with the British team gave Deignan considerable financial and career stability, and is an experience he appreciates. “There have been lots of ups and downs. But to be able to finish my career healthy and at the top of my sport with the best team in the world, makes me grateful and proud,” he said. “On to the next challenge.”

Deignan’s contract with the team was up this year. While The Irish Times understands he was in talks with other teams, he has now taken the decision to retire. His wife, the 2015 world champion Lizzie Deignan, recently gave birth to their first child. She will return to professional racing in the coming months.