Tyson Fury: From 18 pints in a day to a world title challenge 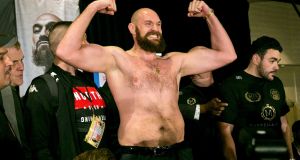 Tyson Fury, one of the world’s best boxers, says he has been living clean for the past 12 months. The dark thoughts and alcohol-fuelled binges are gone, he says, replaced by gruelling twice-a-day training sessions in a return to the sport he thought he had quit for good.

“I only live for today,” Fury said the other day in the living room of the mansion he has been renting in the Hollywood Hills. “Whatever happens today is a blessing, and whatever happens in the past is gone forever. You can never recalculate it or get it back, not unless you find a time machine somewhere in the bushes.”

The living for today part? That much has not changed for Fury, 30, who will challenge Deontay Wilder, the reigning World Boxing Council heavyweight champion, on Saturday night in a highly anticipated fight at Staples Center. Not so long ago, Fury was living for today because he had complete disregard for tomorrow, a symptom of what he has described as bouts with mental illness and depression.

But the words mean something different now — gratitude for his opportunities, he said, and an eagerness to make the most of them.

“My perspective has changed,” said Fury (27-0, 19 knockouts), who will be the underdog against Wilder (40-0, 39 knockouts). “I appreciate everything now, where before I didn’t. I didn’t appreciate sanity.”

Fury, who is from England, calls himself the Gypsy King as a homage to his ancestral roots among Irish Travellers. He does not mind that it works as a nifty bit of marketing, either — this notion of himself as a roving warrior. Every boxer needs a nickname.

Gypsy King “makes me sound like a character from ‘Game of Thrones’ or something,” said Fury, who, at 6 feet 9 inches and 257 pounds, looms like an iceberg.

But does he really need the help? His surname, after all, is Fury, and no one has ever accused him of being a bore, having established himself as one of the sport’s most polarising figures.

Pieces of Fury’s back story have taken on an apocryphal feel: like how he says he was born eight weeks premature, weighing in at one pound (look at him now), or how his father, John, a former boxer, named him after Mike Tyson, assuring his son’s future in the family trade.

So when Fury stunned Wladimir Klitschko in November 2015 for the world heavyweight title, the victory was the fulfilment of a dream. But that was the problem: Fury said he suddenly felt as if he had nothing left to achieve. He had fame and fortune, but sensed that he was in trouble.

“I didn’t want to box again,” he said, “and I knew that straightaway.”

Still, Fury was scheduled for a rematch with Klitschko when he gave a rambling interview that landed on YouTube in May 2016 and that included homophobic, misogynistic and anti-Semitic remarks. Amid calls for him to be barred from the sport — Fury had a history of making offensive comments — he issued a public apology.

Asked this month whether he regretted having made those remarks, Fury declined to comment, saying: “Anything that’s going to get me in trouble, I’m not willing to talk about. I only want to talk about boxing.”

He added: “All of these things, they’re just my opinions, so they don’t mean anything, anyway. What does a fighter’s opinion mean on politics? Nothing. Donald Trump’s the president of the United States. It’s his opinion that means something, not mine.”

In any case, Fury was beginning to spiral. His rematch with Klitschko was delayed, then called off, when he failed two drug tests. Fury gave up his belts and had his boxing license suspended in October 2016.

“I saw the depths of Tyson’s out-of-control stage,” said Stephen Espinoza, the president for sports and event programming at Showtime, which is broadcasting the fight on pay-per-view. “At the time, I don’t think anybody thought he would ever fight again. I think most people were just wondering if he would be okay.”

Fury filled the void with food, booze and cocaine, he said, a life of unmitigated excess. The most taxing part of his day was picking the pub where he would meet up with friends. It was not uncommon, he said, for him to pound 18 pints of lager.

“It wasn’t terrible,” Fury said. “I could think of a lot worse things to do. But there comes a point where it gets out of hand, and you don’t realise it’s gotten out of hand until it’s gone too far. You think you can just walk away at any time, but really, you can’t.”

Fury said he contemplated suicide, nearly driving off a bridge in his Ferrari at 190 miles an hour.

“I just didn’t feel like I wanted to be here anymore,” he said.

He briefly sought psychiatric help, but refused long-term treatment and anti-depressants because he was wary, he said, of the grip that prescribed drugs would have on him.

But he did experience fleeting moments of clarity. About a year and a half ago, he travelled to Spain at the invitation of his friend Billy Joe Saunders, a middleweight who was training there in advance of a title fight. Saunders had asked Ben Davison, his trainer, whether Fury could visit. Everyone around Fury was aware of his issues.

“I’d met Tyson a couple of times, and I knew what sort of character he was,” Davison recalled. “I thought, ‘Well, he’s not coming here for any training.’ But he came over and wanted to do a little training. So on the first day, I gloved him up and we got into the middle of the ring.”

Fury weighed nearly 400 pounds by then, but Davison said there was an immediate rapport between them. A few months later, having completely bottomed out, Fury went to a Halloween party dressed as a skeleton. In a recent podcast with Joe Rogan, Fury recalled returning home that night and going straight to his bedroom.

“I took the stupid skeleton suit off and I got on my knees and I was praying and begging God to help me,” Fury said.

Fury described the sort of epiphany that followed — the realisation that he could rely on his faith, that he had to be around for his wife and four children, that he needed to rededicate himself to boxing.

Over the past year, Fury has gone about the painstaking process of losing 150 pounds with Davison working as his trainer. He got his license reinstated and won a couple of tuneup fights. He has largely avoided controversy, all while speaking at length about his struggles with mental health.

“I know how many people are out there suffering with the same problems in silence,” he said.

Ahead of his meeting with Wilder, Fury deleted the social media apps from his phone and was pleasantly surprised to discover that he did not miss them at all. (Davison tweets for him, just to keep his fans in the loop, Fury said.) Without the mental drain of Instagram and Twitter, Fury has found that he has more time to read, he said. He has been going for evening walks. He has also been working on an autobiography, and he does not plan on leaving anything out. His mind, he said, feels uncluttered.

At this stage, he prefers to keep things simple.

1 David Clifford sends everyone back to their corners unbeaten
2 Gary Neville in Qatar an exercise in semi-journalism
3 Six Nations: Ireland are contenders but England still the team to beat
4 James Durcan steals a draw for Mayo in Ballybofey
5 Communication is key for new FAI president Gerry McAnaney
Real news has value SUBSCRIBE