Running, guns, and women: confessions of a US scholarship athlete

Sean Tobin talks about coming close to being another scholarship statistic 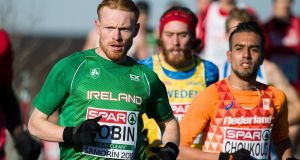 It’s a long way from Tipperary to Oxford, Mississippi – the Pride of the South, Ole Miss Rebel country, John Grisham terrain – and an even longer way back. After 4½ years on a running scholarship at the University of Mississippi, Sean Tobin is sitting in a Dublin café and openly admitting he very nearly lost his way – or at least reached a dead end.

Pinching together his thumb and forefinger for emphasis, Tobin says he was “that close” to being another scholarship statistic – a highly promising Irish athlete who leaves for the US, earns some stars and stripes, and is never heard of again.

Three months ago Tobin was back home in Clonmel feeling sorry for himself, “a failure, miserable, in a dark place really”, before fate or luck intervened; on Sunday he’s favourite to win his first Irish senior cross country title, and it will take a properly bold performance to deny him. The fire is suddenly back – they didn’t call him the Irish Hammer in college for nothing.

Tobin is also being hard on himself, because he certainly wasn’t a failure at Mississippi – a classic southern state campus straight out of a Netflix series, more affectionately known as Ole Miss. In his first individual track race, he won the Husky Classic indoor mile in Seattle in 3:59.91, still aged 19, becoming the youngest Irish athlete in history to break that still magical four-minute barrier; in his third year, Tobin helped Ole Miss win an NCAA national title in the distance medley; last year he came home to win the Irish senior 1,500m title.

Still Tobin struggled to improve over those 4½ years, never quite reaching the standards he’d set for himself. It wasn’t just the common pitfalls of the scholarship route – loneliness, injury, burn-out, although he endured some of those too – but also the common distractions of any college life – the partying, the beer, the women, most of which he managed to keep at bay.

“For me, I never considered not going to America,” says Tobin, the best Irish junior distance runner in 2013, winning an Irish schools’ 800m/1,500m double. “The only question was where? And I was always determined to make the most of it. My coach in Clonmel, Anthony Moynihan, always told me it was like a business deal, they’re paying for your college, you have to give them something back in return. And that’s how I approached it.”

Only why Ole Miss? Tobin considered all the more traditional Irish-American colleges – Villanova, Providence, Iona, Arkansas – then went for the one with no Irish tradition whatsoever.

“The assistance coach at the time, Gavin Kennedy, was from Waterford, and he recruited me. At first I didn’t like the sound of it, then I went on a visit and it just blew my mind, the facilities, and the idea of building a new team, the underdog story. It’s hard to explain, unless you visit Oxford, the pride and passion in the college, and the southern culture, I just loved it.

“My roommate was from Mississippi, his family took me in as one of their own. Mississippi is known for its hospitality, and the culture grew on me, the south is very laid back, relaxed. My roommate was also big into his guns, his pickup truck, that kind of stuff. We moved off campus our first year, and he’d a few guns in his house, and [we] would go hunting at the weekend, bringing back hogs, and we’d roast them. And in my third year we had chickens around the house. All that grew on me over time. And the southern women, of course, who are known for being beautiful.”

The results just weren’t there. It didn’t end the way I wanted

Still, things stop-started: Kennedy was let go that summer, and Tobin delayed his arrival until the spring semester of 2014. Running a sub-four mile helped settle him in, but in his first cross country season he broke down, emphatically, when a metatarsal in his left foot snapped, 600m into the NCAA championships at Terre Haute, Indiana. Tobin spent 12 weeks in rehab, although Ole Miss never once lost the faith.

“Really, for the three years after that, I never felt like myself, except maybe one or two periods. I felt invincible my first semester, in all my races, [I] had the hunger and fire, and just lost that over the time. The injury started it, and it just became more of a struggle. But I never really had any other options. I had to make it work. Coming home wasn’t really an option. I hadn’t even thought of the Irish university system, so there was no other option for me, really. The college support was always incredible, but I had to stick it out, make it work.”

Still Oxford grew on him: the history, the scene of the Civil Rights Movement riots of 1962, when African-American James Meredith was prevented from enrolling at the university (captured in the Bob Dylan song Oxford Town on The Freewheelin’ album); the culture, the home of writer William Faulkner now a museum in the town.

It was an education in other ways too, including the college partying scene: “Our team was very good in that we had high standards for ourselves, and there was never any real messing around. But you could see it was very easy for people to get sucked into the party life. Mississippi is a big party school, especially the sorority and fraternity houses, that was huge, a real eye-opener, these massive mansions on campus. And the style as well, all the girls wearing the extra-large T-shirts and running shorts, that southern look.”

Tobin was on a “full ride”, as they say in the scholarship business: the team had a Nike contract, so all the shoes and gear he needed; $1,100 (€965) every month for food and rent, €200 per diem on every road trip; essentially a professional contract, without actually being “paid”. Still, avoiding the college partying and drinking culture took some discipline.

“Our coach was very fair, pre-season, we’d always cut back, and he’d give us a night to get everything out of the system. ‘Just don’t get arrested, remember you’re representing the team.’ Once the season started there was no fooling around. But we had fun as well.”

“My last three years there, I had two girlfriends, and I even look back on that and think, it was a good experience, and I learned a lot from that, but I also wish I’d spent a bit more time with the guys on the team. It always seemed when I came away from one of the relationships I’d start running that bit better. But that distraction is there, even my last semester I felt the pressure of getting a contract after college, and the results just weren’t there. It didn’t end the way I wanted. I tried the 3,000m steeplechase and that just didn’t suit me, so I left with a little bit of a sour taste. There are so many ups and downs, it does teach a lot of life lessons, but it all goes by so fast.”

The original plan was to link up with one of the post-collegiate running groups in the US but none came knocking, not with his performances, being a foreigner not helping either.

“So I was back in Clonmel, just sitting around at home, feeling like a failure, miserable, in a dark place really, didn’t know what to do with myself, no sense of direction, no options coming in really. Financially, nothing there either. I sat down with Athletics Ireland but there weren’t any clear signs from them either, they had other stuff going on. I know our sport is results based, but you can be left in the dark very quickly.”

Until one evening in August, he got a text from Feidhlim Kelly, coach and sometime pacemaker on the Irish athletics scene, with connections to the Melbourne Track Club in Australia – a distance running group set up by Sonia O’Sullivan’s husband, Nic Bideau. Kelly had just started up something similar here, the Dublin Track Club, with the purpose of providing a training group, and more importantly a base for Irish distance runners, especially those just coming out of college, at home or the US.

“It’s been my saviour,” says Tobin. “The group dynamic, not just the training, but the social thing, just gets you through that transition. And Richard Donovan, who runs the global adventure running business, has come in to sponsor me, made it all possible, and without him I don’t know where I’d be.

“They say running is an individual sport, but it’s not, it’s a team sport, and the reason I’m running is because I’ve always had a team, High School Clonmel, Ole Miss, and now the Dublin Track Club. For now I’m just surviving, but happy with that. And I still have the hunger, and I’m certainly in the best shape of my life.

Sunday at Abbotstown should tell, a National Cross Country Championships to discover the best distance runner in Ireland right now. Clonmel AC are also in the hunt for the team prize. A long way from Oxford, Mississippi.