Mercedes’ Niki Lauda said ‘Lewis will hit him one day. Not with the car but with the fist’ 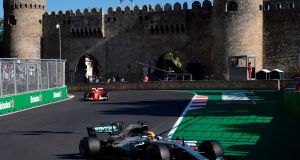 Lewis Hamilton has accused Sebastian Vettel of acting like a “disgrace” after he was deemed to have deliberately crashed into his title rival during a chaotic Azerbaijan Grand Prix.

This year’s Formula One championship burst sensationally into life here following four Safety Car periods, one red flag, and the spectacular demise of the sport’s so-called friendly rivalry in Baku on Sunday.

Despite all the drama, four-time champion Vettel was under pressure to issue an apology to Hamilton and indeed Formula One after his dangerous actions were deemed to have brought the sport into disrepute.

Vettel rammed into the back of Hamilton as the Safety Car was deployed for a second time. Then, the 29-year-old German, furiously gesticulating with both hands, pulled alongside Hamilton, before inexplicably driving into the side of his rival’s car.

Niki Lauda — the non-executive chairman at Hamilton’s Mercedes team and a three-time world champion — described Vettel’s actions on lap 19 as “crazy”, before agreeing that the apparent moment of madness had tainted the German’s reputation.

For his part, Vettel denied any wrongdoing, accused Hamilton of brake testing him, and claimed his 10-second stop-and-go penalty, and latterly three points on his driver’s licence, were unduly harsh.

But it was not a view shared in the paddock with Hamilton, now even further adrift of Vettel in the title race, the first to lay down the law.

“For him to pretty much get away with driving into another driver is a disgrace,” Hamilton said. “I think he disgraced himself today. If he wants to prove he is a man we should do it out of the car, face-to-face.

“It is a misjudgement from him and some people don’t like to own up to their own mistakes.

“The stewards looked at my data and the reason I didn’t get a penalty is because I clearly did not brake test him. It could not be clearer. It is as clear as blue skies.

“Ultimately what happened was disrespectful. There are kids watching us on TV. You think a multi-time world champion would behave better than that. I really hope that kids don’t see that and think that is the right way. That is not how you drive.”

Lauda was equally disparaging. Asked if the incident tainted Vettel’s reputation, the Austrian said: “Sure. He freaked out in himself.

“When you hit somebody up the a*** it is your fault. No question. But to drive next to him and hit him on purpose, I have never seen anything like this.

Lauda added: “Lewis will hit him one day. Not with the car but with the fist. If I was Lewis, I would speak to Sebastian and ask him what is wrong.

“Sebastian said he didn’t do anything wrong. This is his normal reaction. He is still somewhere else in his brain. After three days hopefully he realises.”

On the evidence of Vettel’s mood, however, the German showed little sign of backing down. While he vowed to speak to Hamilton, an apology, it seemed, was not on the cards.

“We had a little contact, but I drove alongside him, mostly to raise my hand. I did not give him the finger. I just wanted to tell him, because I can’t literally talk to him, that what he did was not right.

“I don’t agree with the penalty I got. If you penalise me then you should penalise both of us because that was not the way to do it.”