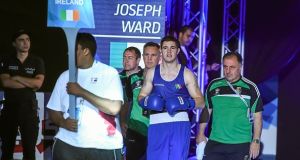 The win, combined with bronze medals for Brendan Irvine and Kurt Walker, sees Ireland finish No 4 in the medals table behind England, Russia and table toppers Ukraine.

Bernard Dunne, the new IABA High-Performance Director, said that he was delighted with the performances of the entire nine-strong squad at the 42nd edition of the tournament.

Ward held his composure against the tall and rangy Dagestan orthodox in all three rounds of the 81kg clash. The Russian certainly came to fight, but Ward picked off the vast majority of the cleaner shots, particularly to the body, in all three frames.

The Moate BC man also qualified for the World Championships in Hamburg, Germany in August/September in the Ukraine, along with Irvine, Walker and Sean McComb who was unlucky not to finish amongst the medals.

Introduced two years ago for Doha 2015, qualifying for the World Championships is a relatively new concept and the Irish contingent of four for Hamburg 2017 is small in comparison to World Championships prior to Doha in which National Federations just sent squads.

However, all four impressed at what is considered the most difficult of the continental championships, and Ward, the No. 1 seed and defending champion in the 81kg class in the Ukraine, once again proved that he is the light-heavy to beat in Europe.