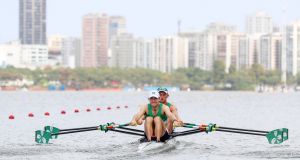 There has never been a time like this in Irish rowing.

Paul and Gary O’Donovan, who came into this year as Olympic silver medallists, could be crowned World Cup series winners at Lucerne in two weeks’ time; Mark and Shane O’Driscoll should take their fourth gold.

The Ireland team for Lucerne will also include two heavyweight single scullers, Monika Dukarska and Sanita Puspure, who both placed in the top 10 at the World Cup in Poznan.

These rowers, and Denise Walsh, who has not been named in the Lucerne team, compete this Saturday and Sunday at the Cork Regatta at the National Rowing Centre. In line with the remarkable growth of the sport here, there are 737 crews entered in this final Grand League event.

The array of Olympians will not stop at Gary and Paul O’Donovan and Puspure. Sinéad Lynch is named in the three seat of the St Michael’s women’s eight.

The Division One women’s eights will be one of the most keenly anticipated events at the regatta. NUIG, UCC/Skibbereen, Cork and Commercial have shown promising form this year. There are Ireland internationals in a number of boats.

There are 16 crews in the Division One men’s eight, but just two, UCD and NUIG are senior units.

Trinity are not part of the picture – they are in Henley preparing take part this Friday evening in pre-qualifying for the Temple Cup.

Trinity will also hope to qualify a Prince Albert coxed four and Clonmel have been asked to pre-qualify in the Fawley Cup for junior men’s quadruples.

The main draw in the regatta, which starts on Wednesday, includes the Commercial four in the Wyfolds.

An interesting entry in the Double Sculls is the French crew of Pierre Houin and Jeremie Azou, the Olympic champions in the lightweight double and great rivals of the O’Donovan brothers.

Women’s Henley did not yield wins for Ireland crews.

Ciarán Brady of Offaly and Glenn Patterson of Sligo provided a keen edge in hot conditions at Athlone Regatta. Brady beat Patterson by one third of a length in the senior single sculls; Patterson had beaten Brady in the intermediate single by two feet.