Daniel Ricciardo wins in Baku as Hamilton and Vettel clash 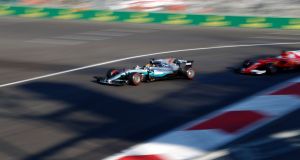 Red Bull’s Daniel Ricciardo took the flag at an incident-packed Azerbaijan Grand Prix but, as his team celebrated their first victory this season, attention was firmly focused on Lewis Hamilton and his championship rival Sebastian Vettel who clashed on the track.

What has been a friendly and respectful relationship between the two drivers this season may well have come to a rancorous conclusion as Vettel appeared to deliberately drive into Hamilton after the pair hit one another behind the safety car. Vettel’s Ferrari finished in fourth, ahead of Hamilton’s Mercedes in fifth, with Valtteri Bottas, who staged a remarkable recovery, chasing down Williams’ Lance Stroll at the very last to take second, although the Canadian claimed his first podium in third.

The race was a far cry from the quiet parade of last year in Baku and one that was defined by the incident between the title rivals when behind the safety car. Vettel now leads Hamilton by 14 points in the drivers’ championship.

Hamilton had a clean and quick getaway from pole but Kimi Raikkonen was clipped by Bottas who was shunted into the Ferrari driver having ridden the kerb going into turn two. Both took damage and it enabled Vettel to move up to second place. A safety car period followed to remove debris from the track. When racing restarted on lap 17 Hamilton made good his escape but Vettel came under a real threat from Force India’s Sergio Pérez, who charged down the long start-finish straight and almost had the place into turn one, but the German just held his position though the corner.

However, the safety car was employed again immediately on the same lap to allow further debris coming from Raikkonen’s car to be removed from the track. On Lap 19, just before the restart, Hamilton remained at slow speed going through turn 16 and Vettel expecting him to accelerate and, doubtless concerned that he could again be caught on the straight, went into the back of him, taking damage to the front wing. The German reacted badly and, clearly angry, pulled alongside Hamilton to remonstrate. While doing so he appeared to purposefully turn into Hamilton.

“He brake-tested me. What the f**k is going on?” an angry Vettel exclaimed. While Hamilton pointed out the German had side-swiped him. “Vettel has literally just turned into me and hit me,” he said.

The incident was immediately placed under investigation by the stewards. Not only had Hamilton and Vettel clashed but after the restart Esteban Ocon went up the inside on to the kerb at turn two and shunted Pérez into the wall causing damage to both Force India cars. The incident knocked on to Raikkonen who sustained a puncture from debris, damaging the rear of the car. The sheer volume of debris from the incidents forced the race to be stopped under a red flag on lap 22.

With the cars parked in the pit lane Hamilton and Vettel did not converse and the latter was able to take a new front wing. After 15 minutes the race restarted cleanly with the two drivers giving one another space. Hamilton once again leapt away out front with a fastest lap putting two seconds on Vettel by lap 26.

Yet there was further drama to come. “Your head rest is loose at the back,” he was told over the team radio. “See if you can pull it into position on the straight.” Hamilton was unable to adjust it himself and, because it is a safety requirement, the team were forced to pit him to secure it. He did so on lap 31 and at the same time Vettel was given a 10-second stop-go penalty for dangerous driving.

Hamilton rejoined in ninth and after Vettel took his penalty stop on lap 34 he exited in seventh ahead of Pérez, who was just in front of Hamilton, promoting Ricciardo to the lead over Stroll and the Haas of Kevin Magnussen in third. Hamilton was immediately on his radio with his opinion for the race director. “A 10-second penalty for driving like that is not enough, you know that, Charlie,” he said.

By lap 36 the two were line astern on track again but with Vettel leading and able to hold his place over the British driver as they moved through the pack in to fifth and sixth on lap 40. Ocon and Bottas took third and fourth from Magnussen on lap 38 and Bottas promptly took third from Ocon. Vettel passed the latter for fourth on lap 42 with Hamilton doing the same a lap later. They had made it back to fourth and fifth but could go no higher. The ramifications for them and the title fight of this dramatic and clearly emotional race will run and run.

Out front Ricciardo had an equally remarkable result. The Australian had dropped down the order from starting in 10th on the grid with debris in his brake ducts that caused overheating. This problem was solved when he pitted on lap six and then from 17th he fought back to take the win. Red Bull have not led a race all season; Ricciardo may have inherited it but he had to fight hard to so.

He made a brilliant restart after the red flag to pass Felipe Massa, Stroll and Nico Hülkenberg into turn one to move up to third place from where, with the extra pit stops for Vettel and Hamilton, he took the lead. It is the fifth win of his career and is the first victory for Red Bull since the Australian took the flag in Malaysia last year.

Bottas, too, had quite a comeback. He had to pit for a new nose on lap two after hitting Raikkonen but dropped to last place and went a lap down in doing so. A race-long fightback ensued and when the leaders fell away he made move after move to take second – finally passing Stroll just before the finish line on the final lap.

Stroll is the youngest rookie, at 18, to score a podium and Williams’ first podium since Bottas was third in Canada last year. Having scored his first F1 points at the last round in Canada, he dealt with the pressure of the final laps with great maturity.