Two of the three Irish riders who completed in Sunday’s Grand Prix in Austria, finished in the placings 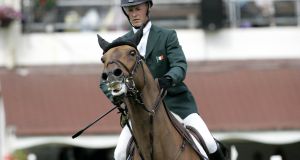 The Waterford-born rider was one of a dozen who contested the jump-off round but one of only five who was on a zero score. Three of his main rivals had a pole down in the second round but Britain’s Keith Shore went into the lead when clear on Mystic Hurricane in 53.53.

Third last to jump, locally-based Condon shaved over three seconds off that time with the 11-year-old Balzac (49.86) and then held on to win with Britain’s Robert Whitaker, who picked up a single time fault in both rounds with Catwalk IV, finishing third. Co Offaly native Darragh Kenny, who had four faults in the first round but was clear in the jump-off, was fifth with Team de Coquerie.

Two of the three Irish riders who completed in Sunday’s Grand Prix at Treffen in Austria, finished in the placings, Co Meath’s Cian O’Connor placing third with a second clear in 50.36 on Skyhorse while Denis Lynch, who had a pole down with All Star 5, finished fifth. Swiss riders Steve Guerdat and Martin Fuchs were both clear in 49.43 with Corbinian and Clooney 51 respectively, picking up €77,625 apiece.

James Kernan, team manager for the four under age teams competing at this Future Champions show, commented: “This was an incredible result for Anabelle, she really was superb to win the class being drawn early in the jump-off. Cormac Foley was also excellent last night to finish second just a fraction behind the winner, he hasn’t knocked a fence here all week which is incredible. All our riders have been brilliant here all week and deserve huge credit.”

Women filled the top four places headed by Germany’s Julia Krajewski on Samourai du Thot (41.10). Britain’s Nicola Wilson moved up a place after the final show jumping phase to finish second on Bulana (41.70) while Germany’s Bettina Hoy, who had led from the dressage phase, dropped from first to third when lowering a pole and picking up three expensive time faults in the show jumping ring with Designer 10 (43). With one of just four totally clear show jumping rounds, the USA’s Marilyn Little improved from overnight ninth to fourth with RF Scandalous.

At home, Sunday’s latest leg of the Connolly’s Red Mills SuperLeague, the O/CNC2* class at Annaharvey, was won by Co Wexford’s Patrick Byrne on BGS Star Attraction, an eight-year-old Capitalist gelding owned and bred by the rider’s father Paddy.

There were celebrations in the Irish camp on Saturday when Helen McFarland (She Stoops to Conquer) and Nicola Boud Tighe (Inchaallah Claddah) both completed the FEI 2* 120km endurance ride at Seacliff in Scotland.

1 GAA players spend just 2.5 seconds within 2m of each other during play
2 How a GAA club sprang up in east Belfast over Sunday breakfast
3 LeBron James among those to slam Drew Brees’ anthem comments
4 Eoin Murchan on being the wrong player in the right place at the right time
5 ‘Why do you need the money now?’: Schalke apologise for ticket refund questions
Real news has value SUBSCRIBE

Rafa Nadal says he would not travel to US Open in present circumstances 15:09
Premier League to allow five substitutions per team when games resume 14:34
‘Why do you need the money now?’: Schalke apologise for ticket refund questions 13:50
Shane Long signs new two-year deal with Southampton 12:46
Social distancing takes a back seat as fans return in Hungary 08:58
Here is your handy guide to sport on television this week