The best athlete in the world some people never heard of 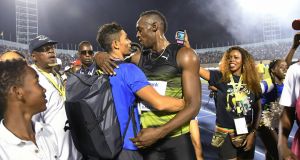 My brother threw a barbecue for the summer solstice and invited me along in the interest of sporting and gender balance. And for good reason.

This, after all, is the same family who once thought George Foreman only made grills, can’t believe David Gillick is not only a chef, and just last week asked me if the Lions Tour was some kind of travelling circus.

Not realising that might actually be closer to the truth than their imagination.

There is something gently refreshing about company like this. For all the exuberance of those selling events at Eden Park, and they are many, not everyone sees it as the most lively event this weekend. Not when The Moonlandingz are playing Midnight Circus at Body & Soul.

Perspective goes a long way, and as interesting as it is to debate the athleticism of Sonny Bill Williams versus Ben Te’o, the posturing of Beauden Barrett versus Owen Farrell, there are some people at the exact same table who have no idea what you’re talking about.

The same people who asked me to name the best athlete in the world right now, and reacted with puzzled stares all round when hearing me say Wayde van Niekerk. Not Usain Bolt? Now read on.

There weren’t many unforgettable nights inside the Rio Olympic Stadium last year, but the Sunday August 14th was definitely one – a fleetingly rare moment when the past and the future of the sport seemed perfectly entwined.

Bolt was the headline act, winning his third successive Olympic 100m title, although that performance had been inescapably eclipsed – 20 minutes earlier, to be exact – by van Niekerk’s world record of 43.03 seconds for 400m, the young South African winning from lane eight, coming frighteningly close to 42-second territory in the process.

The previous record of 43.18 had stood to the American Michael Johnson since 1999, and everything about van Niekerk’s performance suggested this was only the beginning.

At age 24, he hadn’t come from the proverbial nowhere and had already run 43.48, the then fourth-fastest in history, to win the gold medal at the 2015 World Championships in Beijing.

What had already set van Niekerk apart, prior to Rio, was the fact he’s the first man in athletics history to go sub-10 seconds for 100, sub-20 seconds for 200m, and sub-44 seconds for 400m. No one expected him to run 43.03 in Rio, at least not out in lane eight, although it was an exceptionally fast race (seven men running under 44.50, unprecedented in any 400m race).

What also set him apart in Rio was the fact he was coached – and still is – by 75-year-old great-grandmother Anna ‘Tannie Ans’ Botha, at The University of the Free State in Bloemfontein, if that’s not a little too much stranger than fiction.

Now, van Niekerk has come out in 2017 and already gone faster again. He improved his 200m best to 19.84 seconds in Kingston, Jamaica earlier this month – again producing the performance of the night billed as the first farewell Bolt, won the 100m in 10.03 – and on Tuesday night in Slovenia, van Niekerk improved his 100m time to 9.94, clipping 0.04 off his previous best.

They may be at opposite ends of their career or indeed peaks – van Niekerk turns 25 next month, Bolt turns 31 in August – but surely they are two rare an athletic breed for their paths not to cross once more, even on something of a middle ground?

The natural stage would be the World Championships in London, now just six weeks away. Van Niekerk had always declared his intention to double in 200m/400m, even though the original scheduling had the 400m final on August 8th, just hours after the first round of the 200m.

Then in April, the IAAF agreed to a request from the South African federation to move the first round of the 200m to August 7th, to “better allow for a 200m/400m doubling opportunity” – and it looks perfectly set up for van Niekerk to do exactly that.

Bolt, meanwhile, is intent on sticking to his retirement tour: he has only two races lined up before London – in Ostrava next Wednesday, and Monaco on July 21st – and is adamant he will only run the 100m at the World Championships, plus the 4x100m relay. No 200m. No final showdown with van Niekerk, in other words.

It’s unlikely, though not impossible, that van Niekerk will challenge Bolt’s world records in the shorter sprints, although he certainly intends on trying: “I am a 100m, 200m and 400m athlete, so will dream for every record there is,” Van Niekerk said. “What sort of athlete would I be if I didn’t?”

Bolt’s supremacy as the best athlete in the world may have run its natural course, van Niekerk already ascending into that position, unheard of by some or not, and it must at least be teasing Bolt to briefly reconsider his decision to retire before meeting his match.

And isn’t any advance retirement, unlike those of certain thespians already living in their country retreat, always a little suspect to begin with?